Time got away from me a bit in February.  After painting 40+ old Minifig Mythical Earth figures and most of a DBA army of 1/72 scale Bronze Age Libyans in January, I had intended to finish up the Libyans, relax a bit by painting a few 1/72 scale fantasy things for the Portable Fantasy Game/Campaign, and go on to some 40mm French Revolution.  Unfortunately, I got as far as “relax a bit”, and suddenly ran out of month.

For the Portable Fantasy Campaign (PFC), I most recently completed the army of the Cold Islanders, and can generally make do for the two basically medieval armies.  I resolved to work on bringing the Orcs up to strength, so naturally ended up painting elves instead...

The PFC is being built to use Hordes of the Things as the mass battle rules.  I am a little short on the more fantastic elements in plastic, so when I painted on of these Reaper Bones “saproling” figures the other month, I got the idea that it would be nice to do a pair of them with a Caesar elf sorceress as a Beasts stand.  The saprolings drybrush easily, and the sorceress is in a pose that invites a little freehand on her dress.  My son Norman and I had come up (at his inspiration) with a set of “seasonal” elf units, the Springblossom, Summerbough, Autumnleaf, and Winterbranch Guards, so I painted her with a design suggesting that she’s attached to the Springblossom Guards.


I have the saprolings on hand to do one more stand, and would expect to vary the sorceress’s attire to one of the other seasons, probably the Autumnleaf Guards.


In a recent roleplaying game, we were up against a broom-riding witch, and I tried my hand at a little bit of greenstuff work, changing the staff on a Caesar Adventurers female magic user to a rather rustic broom.  It came out usable, and I painted her in a red/black color scheme.  To use her in a game, I felt like she should have a guard/retinue, so I picked a few figures for that, a Caesar Adventurers rogue, a trio of Accurate men-at-arms and a knight, and a Caesar archer.  I did them in the same red/black theme, and gave all the shields a matching household badge design. (Per pale, sable and gules, a crescent argent...)

I recently received a box of Strelets Roman Transport figures, intending to use the pack mules as part of my baggage train.  However, my eye was also drawn to these two figures. 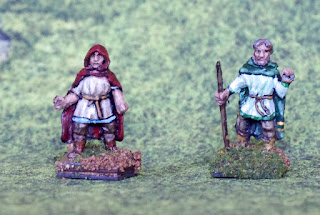 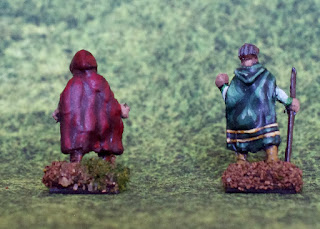 I’m not sure how Roman they look, but they do look like they will do double duty as a possible rogue and mage, to add some variation to the PFC’s player character collection.  Since they are for a fantasy purpose, I didn’t worry too much about whether the colors were achievable with historical vegetable dyes, the sort of thought process that most people somehow manage to avoid getting wrapped up with...