The Harford Area Weekly Kriegspielers (HAWKs) ran our annual game day/convention, Barrage, this past weekend, 27 and 28 September.  This is the second year that we have extended Barrage to a second day, and the experiment seems to be working out.  Unofficially, it was looking like we had about 190 attendees, up about 30 over last year.  We wanted to make sure that there were enough games to keep everyone playing, so our event organizer encouraged us to offer something extra.  I signed up to run three games, two 54mm medieval skirmish games, and one 40mm Not Quite Seven Years War game.  My elder son, Norman, volunteered for two sessions of mass fantasy battles with his home rules using 1/72 scale plastic figures.

Since this is only the second year that we have had the extra day, I was unsurprised to find that attendance built a little slowly on Friday, so I cancelled my first medieval skirmish game and jumped in a guest GM’s modern microarmor game, with a NATO vs. Russians scenario.  (Norman ran his six-player game for two players about that time.) The tank scenario was a night action, so spotting was difficult and ranges short, giving it the flavor of a knife fight in a phone booth.  It was interesting, and not my usual cup of tea.  I was absorbed enough in the play that I forgot to take any pictures, but the GMs had pre-assembled the battlefield from hexagonal tiles in a traveling case, a very clever technique.

As the afternoon progressed, more attendees were arriving, so I was able to run the second scheduled session of my skirmish game with all six positions filled.  This was done using my home rules, “Medieval Mayhem”.  The whole project was originally built in 2003 for the HAWKs’ Battles for Beginners Contest, a showcase of things that one could do with a limited budget—one hundred 2003 dollars, equivalent to about $150 in 2019.  I ran games with it regularly for quite a while, but the figures hadn’t been on the table since Historicon in 2014.  I’ve added a few bits and pieces since then, and I have a few more left to do, so I’d like to get this back into the rotation for conventions.  The only difficulty in that is that the 54mm terrain is bulky, so I can’t really take it too far away unless I’m driving. I used my usual scenario for this game, involving a group of French soldiers attempting to prevent an English foraging party from returning to a besieged castle (which is off the table).   This was a bad day for the English; their longbowmen were generally ineffective, so only a single knight from the foragers made it off the table on the castle edge, which that player considered to be a personal victory, given the circumstances. I discussed the rules with Ross Macfarlane before the convention, and have edited a slightly updated 2019 version, which I’ll try to figure out how to post here.  Mostly, though, the rules are still the same as the prototype version we wrote on a napkin over dinner just before the convention in 2003. 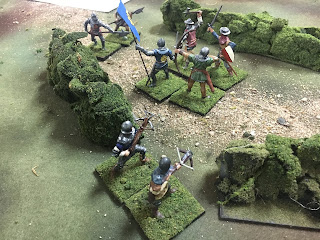 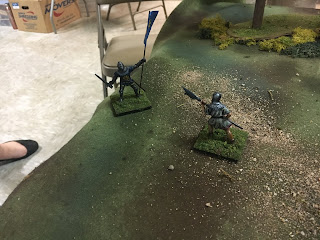 After a night’s rest, I loaded up the car (with assistance from Norman) with all of the Not Quite Seven Years War figures we needed for the game.  The scenario was a riff on a game I fought with second son William a couple of months ago, in which a relief army (provided in this case by Schoeffen-Buschhagen and Wachovia representing the Pragmatic Coalition) needs to seize a set of three objectives defending by the besieging army (provided by the the forces of the Western League) in order to raise a siege.  We used A Gentleman’s War for the rules, setting it up with one of the recommended multi-player techniques—using one activation deck per pair of players. I was kept busy shuttling from one end of the table to the other refereeing, so I don’t have a good grasp of the overall action, but none of the three Coalition columns took their objectives.  After two and a half hours of play, the attackers were pretty thoroughly depleted, and we called it a resounding League victory.  I was unsurprised to find that one wing and the center ended up in an overlapping battle, and the players concluded that they needed to be on one activation deck.  They took care of that without my intervention, showing that they had a firm grasp on the rules by then.  Everyone seemed to be having a good time, but I feel like I could do a little better on the rules explanation.  The melee system is the fussiest part of a fairly simple set of rules, with three steps necessary (determination of advantage, melee, casualty recovery and results).  None of them are especially difficult, but it did seem to be the cause of most of the refereeing, so perhaps more practice on the explanation would help. 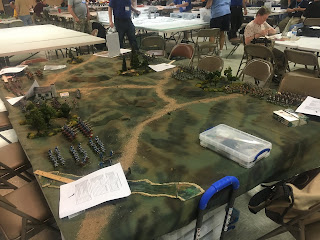 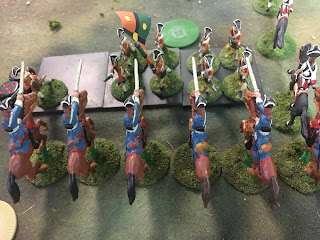 Norman finished his second fantasy mass battle game before I was done with the NQSYW, so he was able to help me clean up quickly.  We had some extra incentive to do that, because we were both signed up to play the next game on the table: Matt Kirkhart’s Bridge of Khazad-Dum.  Matt makes amazing miniatures from bits of wood and craft foam, and has been coming to Barrage since 2009 or so.  He started off doing ancients with these figures (styled “crafties”), but has brought fantasy lately.  Last year his dungeon crawl feature the idol from the cover of the AD&D 1st edition Player’s Handbook, and this year he went full Tolkien with two Moria scenarios, Balin’s Tomb and The Bridge of Khazad Dum.  Unfortunately I missed seeing the first.

In The Bridge, the nine chararacters of the Fellowship were played by five players, and Matt played the opposition, making it a co-op game.  I had Merry and Legolas.  The Fellowship simply had to cross a hall and the eponymous bridge, which looked easy enough until goblins started swarming everywhere.  Things looked grim as Gandalf was felled early on by a lucky hit by a goblin arrow, leaving us with nothing which would actually wound the Balrog, which presently showed up.  As can be seen from the pictures, he was an impressive bit of crafting, standing nearly a foot tall.  As we retreated step by step across the hall, cowed by the menace of the Balrog, we were lucky that the Balrog couldn’t roll a good die...we just ended up being pushed back, and, in fact, nobody was wounded.  Eventually, eight of the Fellowship made it out the door, just as in the book...so clearly they must have told Galadriel a tale with a few, um, embellishments, to give us the story that we have today. 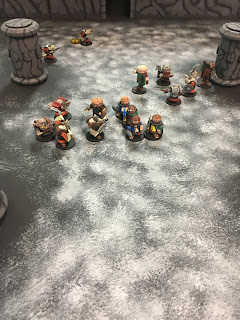 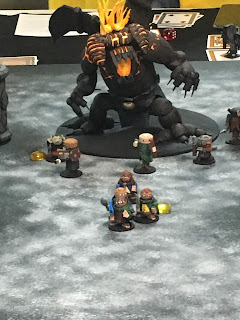 After that, it was all over for me except for the clean-up.  One wind-down game of Roman chariot racing was going on as we broke down our tables, but everything was well in hand when I pulled out at 9:30 or so.  I needed to unload when I got home, but left things in piles until this morning. Running two different games with big figures and big terrain really tested my loadmaster skills with respect to my Toyota Yaris...Norman remarked that I should consider writing a sequel to our earlier book, Big Battles for Little Hands, which I should title Big Battles for Little Cars. 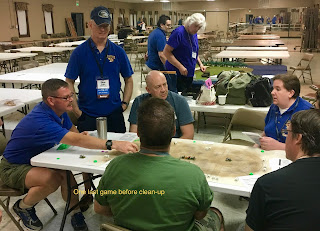 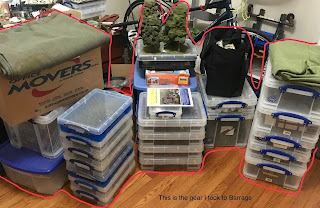