I have a game using the Mythical Earth (ME) collection scheduled for this afternoon, so I was pleased to be able to put a final varnish coat on a few more troops.  Several of these guys will be needed for the game.

As seen in the August painting post, I have managed to acquire some inspiration (from epic muse Calliope, no doubt; historical muse Clio having taken the week off) for working on the ME project, and that carried through this week, with 4 ME23 true orc archers and 3 ME24 true orc swordsmen.  The ME23 isn’t a bad one to paint; with modern techniques you can get a quick shading effect on the folds of the cloak and tunic, but there isn’t much to do with ME24.  My brother has done some with red eye tattoos on their foreheads (since it’s the largest blank area on the figure), and I took that as the inspiration for some warpaint.  Since I already have a composite unit of archers and swordsmen completed (with three of these archers), these swordsmen are the first of a second composite unit, and I think I’ll go ahead and do the warpaint on the rest of the swordsmen as a handy way of identifying the units on the table.

However, before I do that, it’s time to file and prime, because these seven were the last orcs and goblins ready to paint.  With any luck, I’ll set up another 8 this weekend, and a unit of 12 ME50 goblins. 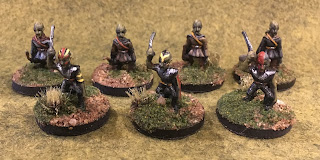