Now that we have reached the 31st, I am pretty sure that I am not going to get any more painting done this month.  It’s been a pretty good month, overall, with the 40mm artillery, a handful of 1/72 plastics including the carts for the next solo game, and two batches of vintage Minifig ME figures. 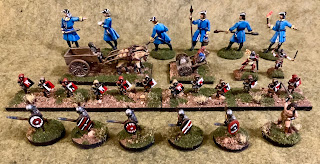 This is the third unit of 12 ME50 goblins; I did a quick inventory and found that I have 36 on hand, so I need three more shield design themes for the units.  I’m thinking hands, skulls, and mountains.

My old friend Joe handed me a little batch of 5 ME56 armored goblins a while ago, and I got them finished this week as well.  That gives me 13, a unit with one left over.  When I played a game with them back in February, I had them mixed in with the true orcs.  Now that they are to be split out, I need to finish up enough additional true orcs to round out those units.

Getting in another solo game with the 1/72 Portable Fantasy Campaign is on my to-do list.  I worked out recently what the next scenario was to be, and found that I needed three convoy elements, so I figured that I would use a Robin Hood Maid Marion as an escorted noblewoman for one.  That left me two to find, and I had these two carts from the Strelets Crusader Transport set primed.  It seemed like a good time to finish them.  I’m on my own next weekend, so I hope to set the game up and actually play it.