The Annexation (and a word on future plans) 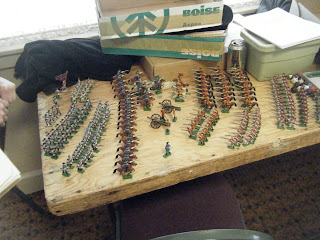 I mentioned this morning that we had a significant find in the flea market.  One of our HAWKs, Don Hogge (himself a participant in the NQSYW), had a flea market table, and sent word down to the HAWKs room that the fellow on the table next to him had some Prince August molds which we might want to take a look at.  Collecting up my son Norman (aka the Prince Palatine of Wachovia),  we wandered up.  We found someone selling a box of about 30 molds, cavalry, infantry, and artillery, and a box of (mostly) painted figures.  This was not originally his project, but was one that he had bought from someone else who had given up on it.  As a result, he was prepared to part with all of it for a very reasonable price. 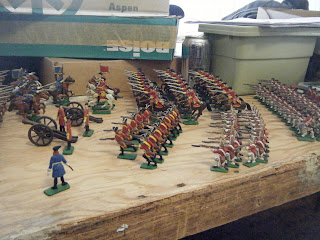 So we appear to have annexed two additional countries, a heavy artillery battery (sans gunners) about two Charge! regiments of cavalry and about a regiment of foot per side, though the organization of the troops would suggest that some other set of rules had been in mind.  I've already had offers from other NQSYW powers to take over some of the troops, so whether I'll end up with an opponent for out of it or not is an open question.

Given the vast amount of entertainment my mold collection and Charge! project have generated to date, I must admit to feeling a little sorry for the previous owners of this material, who clearly weren't as enthusiastic as we are.  However, it also feels good to put things back to their proper use, so I'll raise a glass to our benefactors at the next convention, and hope to get these troops into action at the earliest opportunity.

We also had some time at the convention to discuss the planning of the fortress/siege game for Historicon.  Between a need for gunners and the need to fill out the new units, our agenda for the next casting day has been set.  We hope to set a date for some preliminary power saw work on the fortress itself.
Posted by Rob Dean at 3:34 PM