A lot has been going on since I last blogged, both in life and in hobby activities.

My younger son has returned to this part of the world, so, with both sons relatively nearby, we are looking forward to some family wargmaing time.  However, moving just before the holidays has meant that everyone has a lot of activity already scheduled.  We did manage to get a good game in on the margins of the Thanksgiving feasting last week: 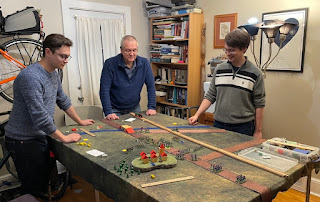 I managed to get my limited French Revolution collection on the table for a solo game recently. 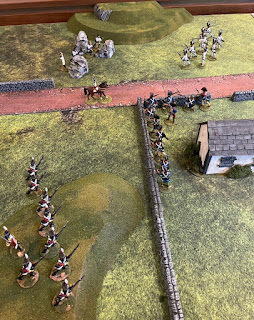 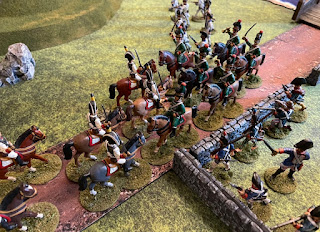 This was in service of a playtest of some new horse and musket large skirmish rules currently in development, so I won’t comment on that part of it, but it was good to see these figures on the table.  While Norman ran a game with them at an HMGS convention in the mid-teens, I personally haven’t had them on the table since 2009.  Until November, they had been my second longest unplayed project, topped only by my neglected little 6mm Spanish Civil War collection, which was last on the table in 2005.  I plan to bring out the French and Indian War figures (last played in 2016 when Ross came down for Fall In) for the next playtest, but with the holidays, that might be a few weeks yet.

A few weeks ago I visited Days of Knights, my friendly local game store, and was surprised to find that the latest release in Osprey’s series of role playing games was a “clockpunk” Italian Renaissance game, set in a 1510 that included advanced Leonardo da Vinci technology. 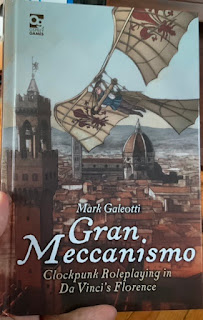 Now, as it happens, I have a 40mm 16th century toy soldier project already in hand, and I am currently the possessor of some Leonardo-type machines built by my friend Chris Palmer back in the late 1990s. I dug them out to take a look, and found them all to still be in good shape: We used these for a year or so and then got distracted (as is so often the case).  Chris dug out some print pictures of them in action back around 1998.  Here’s a sample: 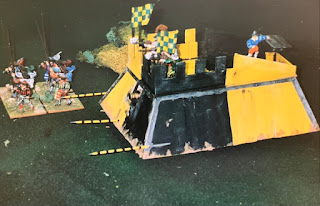 So I have spent much of my reading time these last few weeks gathering inspiration to jump back into the period, with a historical book on the early Italian Wars, and a historical novel (Prince of Foxes) on Cesare Borgia.  In podcasts, I’ve been listening to quite a bit of the Yarkshire Gamer’s Reet Big Wargames Podcast lately, and Ken Reilly, the eponymous Gamer, has been displaying his Italian Wars project lately, for additional inspiration.  So, we’ll see what becomes of that.  I am always glad when the Muses grant some inspiration relating to something already in my collection at a playable level.

I have been trying out the “slapchop” painting technique on some old Hinchliffe Byzantines.  That deserves a separate report later… 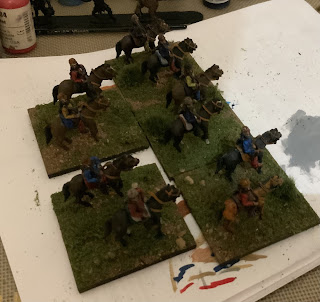 Sorry about the picture quality there…
I tried out Nordic Weasel Games fantasy solo skirmish campaign system, Five Leagues from the Borderlands, a topic which also deserves its own post.  Just for fun, I am playing it using my collection of 1/72 fantasy/medieval figures. 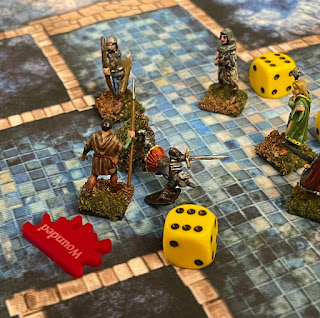 And, last for today, I sent Ross Macfarlane the one good copy of a semi-flat lady riding sidesaddle recently.  This is from a mold by the Adolf Hoehmann company, which apparently operated up into the 1990s and produced a series of molds, both copied from Schneiders and originals.  Information on them was found in the book on German molds I obtained in the summer. 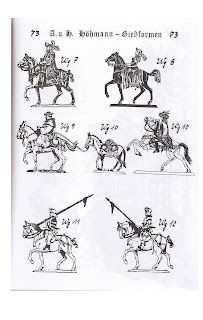 Here’s the catalog page, as provided in the electronic add-ons to the book.  The lady is part of a series of molds making a convey and escorts, and is really intended to be 16th century, although her dress looks generic enough to me to pass for other time periods.  It is unfortunate that these molds are very scarce; the lady was the only one from this series in an estate being broken up on eBay this year.
So, that’s the news from here; lots happening, for a pleasant change!