I would suppose that there is not a wargamer out there who ever gets as much painting done as they hope to.  Most of the summer was occupied by other activities this year, and the fall is getting off to a slow start as well.  I was responsible for running an emergency response exercise for the office last month, which was taking up most of my crerative energy, but, when it finally came time to run it, I ended up with a long weekend in Tooele, Utah, with not much to do except to settle in with my portable painting kit.  I finished up 22 figures in a weekend, including this little dragon which I bought from the local game store while I was there. (The dragon also came with the large skull, which I painted up figuring that I could find a use for a giant/ogre skull for something.)  I have been trying to fill out my planned orders of battle for the five countries involved in my Northlands solo campaign, so I particularly wanted to get some orcs done.  I also had a group of cows (a very small herd, I suppose) that I wanted to add as a baggage element.  Beyond that, I was willing to go with whatever inspired me.

I wasn’t sure what to do with the cows.  My wife suggested that I look at “belted cows”. I hadn’t heard of this as a color pattern, and there aren’t any that I have noticed locally. 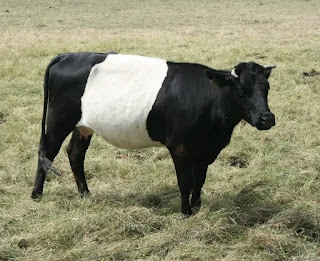 However, it looked like it would be very easy to paint, so, belted cows they are.  Since they are usually going to be deploed into a fantasy setting, I don’t need to worry about when the breed was developed or any of the rest of that “realism” stuff.

In addition to the bases, I finished up 7 individuals.  The orcs are destined for the Rangers of Shadow Deep campaign I am playing co-op with Chris Palmer, and the rest are an ecelectic assortment of Strelets, Caesar and Dark Alliance figures.  The 8th figure, at the far right, was finished before the trip but finally based up with the rest when I got home.
As mentioned, at one point I took a break from the painting to walk down the street to the game store, Game Haven, where I picked up the Wizkids dragon and a couple of bottles of paint.  There was a Joann’s fabric and craft store next door, so I ducked in there to see if I could find something that would work for scenery.  I had the sudden notion that I might play a skirmish game with all of the freshly painted figures. 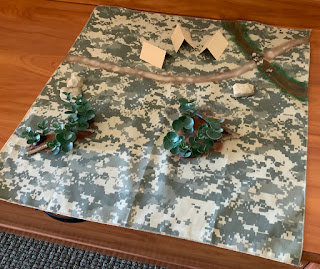 I came out with a camoflage bandanna, a plastic plant, and some tan cardstock, and whipped up this.

My son Norman looked over the available troops and suggested that the rational scenario was humans and orcs squabbling over cattle … until the dragon arrives.  I think that would have worked out, except that time and energy ran out before I could implement it.  Nevertheless, it does seem that it should be possible to have some sort of starter game on the table fairly quickly, should one need or wish to.
After getting home and getting the basing done, it took a couple of weeks to get back to the painting table.  I started in on some Dark Alliance orcish warg riders, but set them aside briefly to allow a heavy wash to dry.  Before I knew it, I was finishing up two “big guys” who had be in progress for a while.  The big eared one is a troll (or “bunyip” in the Dean family) from the sadly out-of-production Caesar Adventurers set, and the other is a Dark Alliance cyclops.  The Airfix Robin Hood figure is just there to give an idea of the scale. 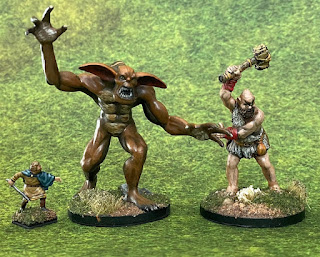 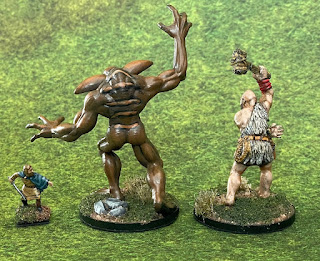 With both sons due to be back in the area, family conversation has turned to DBA/Hordes of the Things armies, so I decided to try to make some progress on an ancient Nubian army (DBA I/3 if that helps) to add to the family Bronze Age collection.

I managed to finish up two warband stands and a skirmisher, so I have two skirmishers and nine bow stands (including a general) to go.
Posted by Rob Dean at 9:15 AM