It is hard to believe that the HAWKs reached Barrage 25 this year; it still seems like only yesterday when someone suggested at a club meeting that a game day would be a good idea.  We went to two days a couple of years ago, and this year we had over 200 attendees including club members.

Unfortunately for me, I had to miss the Friday events, as I was returning from a work trip to Utah over which I did not have schedule control, and didn’t walk in the door at home until 9:30PM on Friday.  I was signed up to run a Not Quite Seven Years War game on Saturday morning.  While I had spent the weekend before the trip organizing my flea market offerings, and ensuring that I knew where all of the Bronze Age gear that my son Norman was going to need was stowed, I did not have the NQSYW scenario materials pulled out.

Therefore, I got an early start on Saturday morning, pulled all the stuff up from the basement, and got it loaded.  It still wasn’t early enough to avoid a bridge closure due to a running event, but at least I knew that it was likely to be happening this year.  Carrying around a stack of boxes loaded with Charge! regiments in 40mm does leave me wondering these days whether I should be recreating the NQSYW in something a little more portable, such as 1/72 scale plastics … 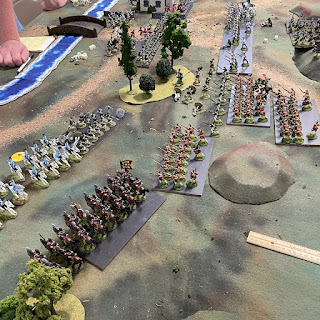 Chris Palmer brought the North Polenburger army, so the scenario involved an attempt by the Northern Alliance, here represented primarily by North Polenburg, to hold a bridge long enough to allow an evacuation after nightfall.  The Pragmatic Coalition was represented by Schoeffen-Buschhagen, Wachovia, and the Imperial Free City of Wiegenburg, as usual. 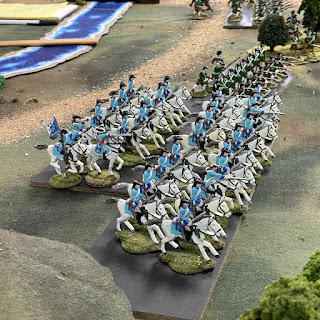 The North Polenburg 32nd Dragoons made an impressive display on their gray horses, as usual. 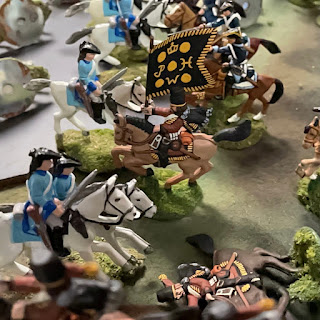 They fought well, although there was one moment when the lone Wachovian Hussar standard bearer fought off a pair of Dragoons and preserved the flag; a commendation is no doubt in order. 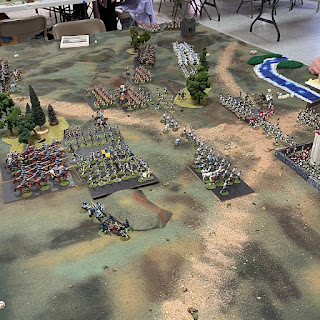 As the battle progressed, the Coalition left flank gradually pushed in the Alliance’s right, in a series of cavalry charges and countercharges so typical of the rules.  The Wiegenburg Regiment (center right) in their white coats (and leading their mascot into the action) suffered heavy casualties in a direct assault on the Alliance line defending the bridge and were eventually forced to withdraw.  A follow-on attack by the Schoeffen-Buschagen Adelmann Regiment, though, was more than the defenders could withstand, and the game ended with the Alliance forces being compelled to withdraw in disorder, seeking an alternative crossing location. 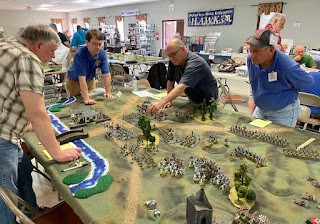 It was, as always, nice to have the NQSYW back on the table.  As I’ll discuss below, there are several reasons why that project is on the top of my mind right now.
Norman has been working steadily on expanding the Bronze Age 1/72 project since last year’s Barrage, and he staged an afternoon game of Egyptians versus a Sea Peoples alliance using his home rules (NURD: Norman’s Universal Rules Design) which looked like it went well.  He ended up coming up prepared to rebase a few of my Egyptian chariots on the spot, to ensure that the Egyptians had the numbers needed. 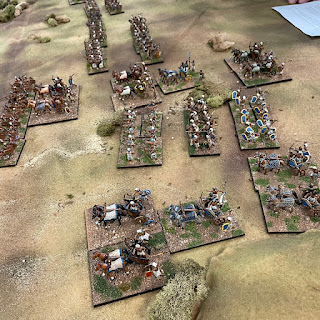 My flea marketeering went well.  I arrived with four boxes of stuff and returned home with two, plus  $370 in pocket, so I was pleased.  It’s no fault of Reaper Miniatures, but I sold off a lot of Bones 5 figures.  I have concluded that I am more interested in recreating (or perhaps just creating) the vision of fantasy miniatures I had in my youth, so I expect to be putting my effort into expanding my vintage 25mm collection instead of trying to keep up with the latest styles.

I mentioned that there were a couple of reasons why the NQSYW was on my mind.  Back in August, right after Gen Con, my pre-ordered copy of Henry Hyde’s Wargaming Campaigns arrived.  As might be expected with Henry Hyde, horse and musket campaigning is front and center, so perhaps this will finally kick me over the edge into doing another NQSYW map-based campign. 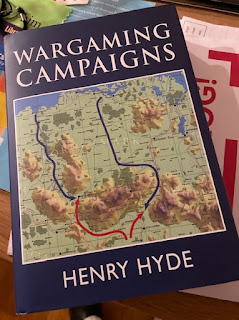 Additionally, William, my second son and the originator of the Pragmatic Coalition’s Imperial Free City of Wiegenburg, has landed a job in the Washington DC area, and will be returning to this general area next week.  His appointment is for at least a year, so his brother and I have been considering some possible agendas for game days, especially since Norman’s basement, as seen  back in June is suitable for miniatures.