Before I forget about it, the HAWKs Saturday morning group played a trial game of Stargrave last weekend (26 June).  We had five players in attendance, and used the rule book’s first scenario, “Botched Deal”, to set up the game. 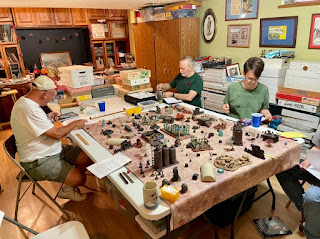 The Saturday group played two campaigns of Frostgrave followed by two campaigns of Ghost Archipelago, so the basic mechanics were fairly familiar.  I’ll hold off on doing a rules review until after I’ve actually read them carefully, but the initial impression is that the fact that all crew members will have ranged weapons, and that loot is “locked” when found (and can’t be carried off until someone successfully unlocks it), will combine to add more conflict to the game in comparison to the earlier entries in the “*grave” series.

I had a handful of figures already painted from an abortive attempt to play Rogue Stars a few years ago, and supplemented them with post-apocalyptic figures.  Following the game, I expect that I am going to need some heavy weapons figures.  I ordered a dozen or so figures from Reaper, which arrived on Friday. 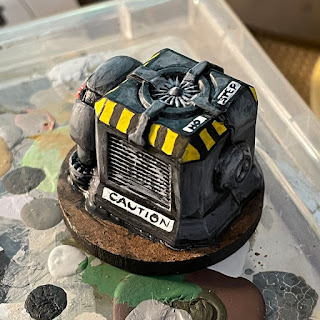 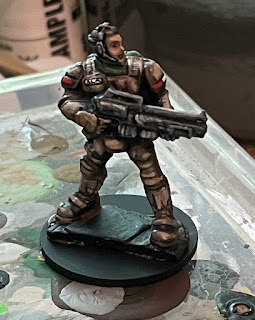 I spent Saturday morning doing a bit of painting, for the first time in a couple of months.  The generator will be a treasure token, and was part of the Friday delivery, which may set a record for shortest time from delivery to painting.  The other fellow has been sitting around with a primer coat since the Rogue Stars game didn’t pan out.
Our next session is scheduled for the 24th of July.  I hope to have carefully read the rules by then, put some additional thought into crew design, and painted the requisite figures…