Following the defeat at Gelbehuegel (during the War of the Western League), General Nordstrom (commanding the Pragmatic Coalition’s invasion of Schluesselbrett) sought an alternative route to the capital city.  A scouting detachment of light cavalry brought word of a possible route, although it was not without difficulty.  The river Blauwasser presented a considerable obstacle, but there was a damaged bridge at the village of Steinbruecke which might be repaired by the army’s engineers, as long as both banks of the river were held.  Accordingly, a reconaissance in force under the command of Colonel Schultheiss was ordered to seek a possible ford and, if found, cross the Blauwasser to secure both ends of the bridge until engineers were brought up to effect repairs.  Schultheiss’s force was a mixed bag, consisting of a battalion of his own infantry regiment, a battalion from the Adelmann Regiment, a detachment of the King Rupert Jaegers, two squadrons of dragoons from different regiments, and a battery of artillery.

With any luck, this maneuver would go unnoticed by League forces, who were occupied defending the main approaches to city… 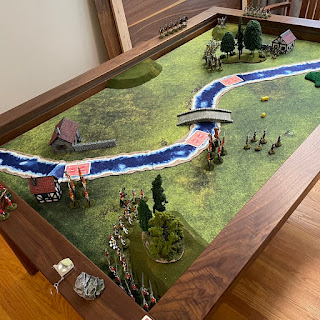 The situation develops: cavalry seeks a ford on both sides

Unfortunately for the Coalition, the League was alert to the danger presented by the bridge, and dispatched a force to secure it, under the command of Brigadier Regelnmann.  Curiously, its composition was much the same as the Coalition’s force: two battalions of line infantry, two squadrons of dragoons, and a battery of artilley, all native Schluesselbrett troops, plus a small detachmanet of Saxe-Kirchdorf jaegers.

Advancing toward Steinbruecke from the north (right side of illustration), Regelmann set his dragoons ahead to determine if the river was fordable anywhere. 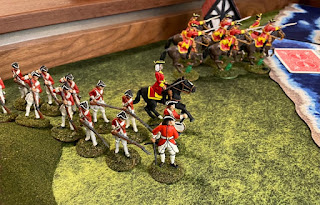 Finding no usable ford upstream of the bridge, the League’s forces continued downstream.  As the Saxe-Kirchdorf jaegers neared a third possible crossing point, they saw a squadron of Schoeffen-Buschhagen dragoons on the south bank.  Preparing to open fire on them, they were surprised when the dragoons splashed across the river and charged them!  The jaegers were unprepared for the onslaught, and hastily retreated. 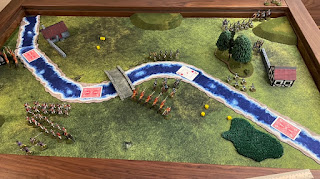 As both sides converged on the crossing point, a squadron of Schluesselbrett dragoons hastily attacked the now-disorganized S-Bs, who in turn retired back across the river.  By then the lead elements of S-B infantry were able to drive the League dragoons off with musketry.  The S-B artillery battery was soon deployed and was able to bring the northern (lower in illustration) side of the crossing under effective fire.

For some reason, General Regelmann’s League infantry was slow to deploy, and the Coalition infantry was able tgo cross the river.  Meanwhile , the League cavalry discovered, upon questioing a local farmer, that the river could be forded with some difficulty upstream of the village (left of illustration), and a portion of the League force was dispatched to make the attempt. 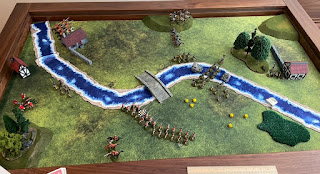 The sun was sinking as a ferocious firefight broke out between the two infantry lines.  Both commanders were in the thick of the action, rallying their men.  On the south bank, a cavalry fight broke out, as a single squadron of Schluesselbrett dragoons, eventually aided by the Saxe-Kirchdorf jaegers and the long range fire of their artillery, faced down the remnants of two squadrons of their Coalition counterparts. 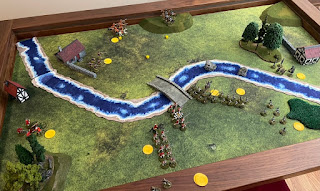 As the day ended, the situation remained in doubt.  The Coalition was in possession of both sides of the crossing, but the damaged bridge was contested, and their cavalry had been very roughly handled by the League.  Both sides sent messengers seeking reinforcements in the expectation that the fight would be  renewed in the morning…

With the HAWKs back to holding face to face meetings, I would like to dust off the Not Quite Seven Years War project, and give the other club members an opportunity to see their forces on the table.  It’s been a few years since some of them have been out. While I’m not done with Charge!, there is no doubt that it would be more practical to use some other rules, preferably with smaller units, for a club night game.  We have been playing A Gentleman’s War for the last couple of years, which I like well enough, but I haven’t been able to make it work for multiple player games to my satisfaction.  Therefore, my expectation is that I will use Ross Macfarlane’s home rules With MacDuff to the Frontier for this.

With that in mind, I invited Ross to join me in a remote game to get the rules fixed in my mind. 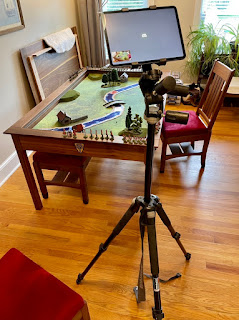 Since the last time I hosted an NQSYW game remotely, I’ve upgraded my remote player set-up.  I can now put the iPad in a clamp on my heavy-duty photographic tripod.

Yesterday was a bit of a rough day around the house, so my preparations were not as thorough as I would have wished.  I looked through the Grant green and red scenario books for something suitable.  My desire to try something new was conflicting with my need to get set up, and I decided on Scenario 13, Finding the Ford, from Scenarios for All Ages (the Red Book).  I kept the scenery to a somewhat expedient level, without a lot of extra detail, and using the subscale 3D printed buildings I’ve painted up during the pandemic, since I was both short on set up time, and in need of fast clean up so that supper could be eaten afterwards.  There are some challenges with using your gaming table as your dinner table.

Nevertheless, despite the challenges, the game eventually got played.  We used Discord for a change, since Google Hangouts, the conference system of choice these many years, is being obsoleted by Google. It was good to see the figures out, and I have some ideas about optimizing large figure games on a smaller table which I need to write down while I still remember them…