We are currently enjoying what I suspect may turn out to be a respite between pandemic waves here, so while my vaccine remains effective, it has been time to do some face to face gaming.  As I noted a couple of weeks ago, I wanted to get the NQSYW on the table at a HAWKs meeting (back on the 16th), so I figured that “With MacDuff to the Frontier” would be a better fit for table size and time available than Charge!.

On the day of the game, I had a look through C.S. Grant’s Scenarios for Wargames, looking for something that would be suitable for the expected limited number of players, and ended up deciding to use Scenario #4, Holding Action (2), which I had never tried before. 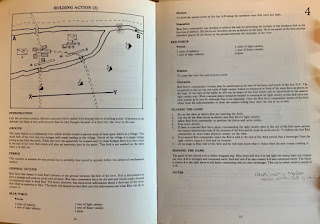 I elected to translate the suggested force ratio to 12 infantry, 6 light infantry, 6 cavalry, or 1 gun with 4 gunners per unit.  Scenery, apart from the river, is relatively sparse, which also made a good choice for an away game.  This was just as well, because, despite my best intentions, I did not allow enough time for traffic and arrived at the meeting in time for a very hasty set up, and then launched right into the rules explanation and game.  As a result, I did not end up taking very many pictures, nor any notes, so reconstructing a detailed battle report is impossible. 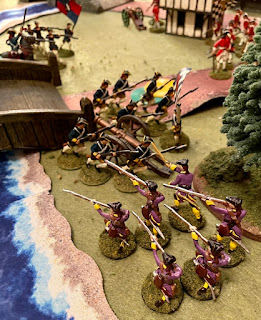 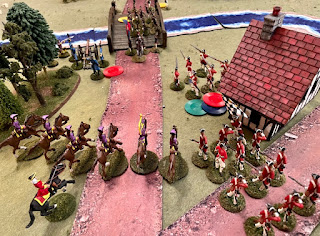 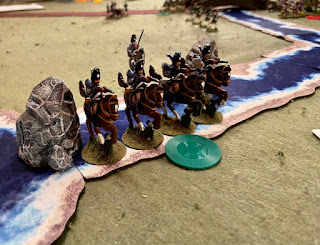 Schoeffen-Buschhagen Hussars discover a usable ford
As the battle played out, the forces of the Pragmatic Coalition (Schoeffen-Buschhagen, Wachovia, and Fredonia were represented on the table) were able to successfully assault the bridges, and the Western League defense was crumbling by the time the Coalition light cavalry discovered a ford and crossed, with the aim of cutting off the retreat of the league forces.  However, the cost of assaulting the bridge was not insignificant, and there was some question as to how closely the Coalition force would have been able to press the pursuit.  All of the recent NQSYW games have been described as part of the campaign to knock the Archbishopric of Schluesselbrett out of the war, and it would appear that the Coalition has finally forced the defenses of the city of Schluesselbrett.
I spent some time last weekend working on NQSYW figures instead of working on my Stargrave crew, so I was compelled to take the field in yesterday’s Stargrave game, the first game that will “count” in our annual campaign, with the same test crew I used last month. 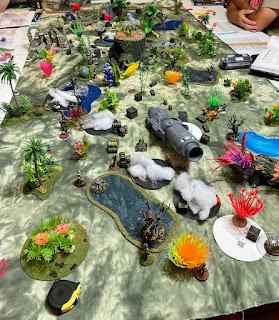 The battlefield; a squabble over a wrecked spaceship
We are still finding our way through the rules, so the game took a little longer than we expected.  It’s rarely my turn to be the lucky one for the day, but my crew brought home three loot markers, which turned out to be quite valuable in terms of the game’s currency.  I did have my captain put out of action at the end of the game, but, happily he merely had a “close call” on the post-game out-of-action survival roll. (Unlike host Chris Palmer’s captain, who was put out of action in the final turn, and died as a result of the survival roll, wiping out all of Chris’s gains in the game…)
As expected, everyone had a look at the rules, and there was a lot of smoke grenade throwing going on. 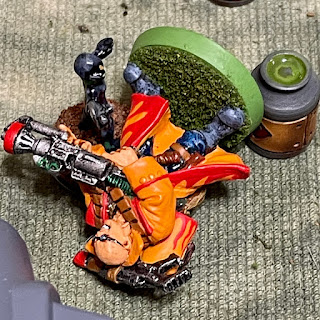 A brief moment of glory for runner Leftie, who put Don Hogge’s flamethrower man out of action with his knife 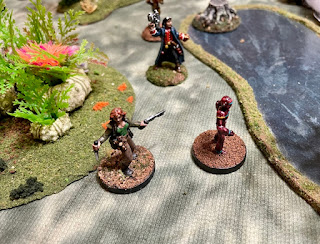 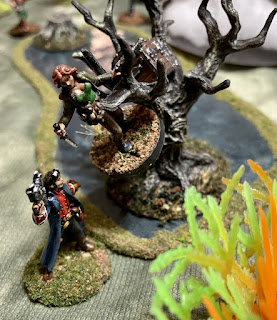 Captain Toby reminds Holly that she will have minions to climb trees when she is captain…
Except for Chris, nobody had any catastrophic post-battle results, so most of the “out of actions” were temporary, and things weren’t quite as grim as several players had feared late game.  I hope to get a few more new figures painted up by next month, as well as some additional scenery. 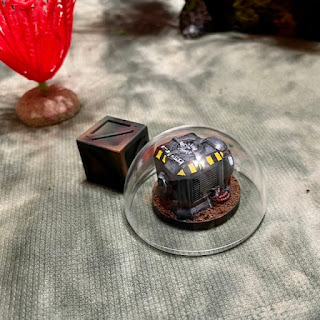 Testing out the new “locked” markers
I think that I noted that one of the differences from earlier games in the series is that loot markers in Stargrave start “locked”, and must be unlocked before they can be carried off.  After last month’s game I went looking for some clear plastic hemispheres which I hoped would look like force fields, to use as “locked” markers. I found these  “bath bomb molds” on Amazon.  There were not very expensive for 30 of them in three different sizes, and seemed to work reasonable well.  With the different sizes, we were able to cover most of the treasure markers we were using.