Norman wrote up a report on the “bracket campaign” for the DBA forums after our visit over the Memorial Day weekend, now three weeks ago.  My intention to blog about this sooner was completely overwhelmed by quotidian reality.

It was nice to see all of his painstaking pandemic painting placed in play. 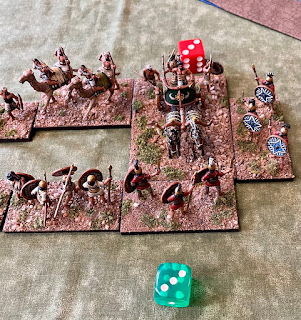 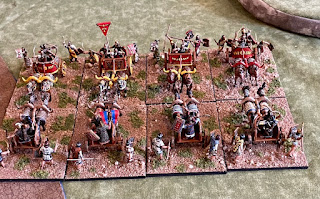 While bad for blogging, I made the decision at the time to be “present in the moment”, and therefore did not take notes, nor too many pictures.
The following Friday (June 4th) the HAWKs met for the first face-to-face club game since this all started. Since our regular meeting location was not yet open to the public, we met at a member’s house, and we played a D-Day American paratroop scenario in honor of the date (or nearly so).
Irene and I then took a road trip to Michigan to visit my parents and my son in grad school.  It was good to see them, and we had a nice dinner out as a combined celebration of all the events that we missed over the past year. I got in a shopping trip to the Michigan Toy Soldier company and picked up a few things for Norman as well as a box of 1/72 scale Ultima Ratio medieval Italian civic militia, who may eventually appear in my solo fantasy campaign.  While I did take a hobby kit with me, the only thing I actually managed to finish was another settlement map for later use in my D&D game: 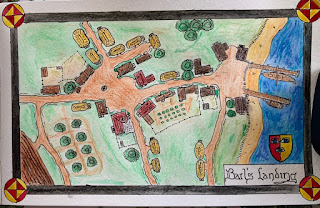 It was a (successful, I feel) experiment in using watercolor pencils to put some basic color on the pen and ink drawing quickly.  While I intend to do the next trial map with regular watercolors, the ease of putting down fairly precise colors with the pencils makes me think that will be the technique of choice for this work going forward.
There was another HAWKs meeting on the 18th (the day before yesterday…seems longer already), and I took my 54mm medieval skirmish game.  I had it out for ScrumCon last year, so it hasn’t been too neglected. 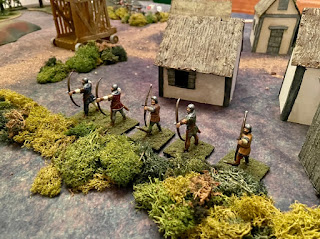 Since it seemed to be a good week for gaming, my brother and I finally resolved a pending skirmish (using Dragon Rampant) in my solo campaign.  I had pulled out the troops and sent him the war band sheets months ago, but the game just never got played.  I decided that I had better keep the set up simple, so that it actually got done. 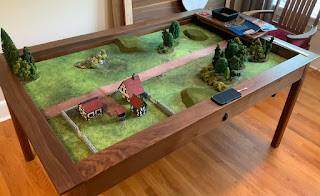 The situation developed as the result of an orc incursion near Wardenskeep, in eastern Darmis. 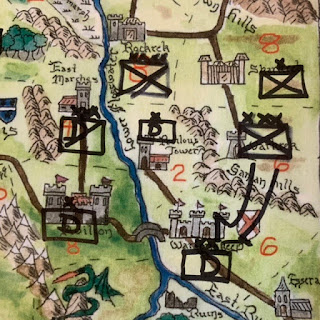 In accordance with my usual methods, I had determined that a skirmish was occurring, randomized an order of battle for the two sides, and then randomized a scenario.  Because I have not yet painted enough 1/72 scale orcs, and my son’s orcs (used for a previous encounter) had been returned to him, I ran this battle with 25mm lead figures, which are not in short supply here.
We ended up playing an ambush scerario.  The Darmish forces (consisting of a unit of axemen, 4 units of archers, and a unit of scouts) ended up as the ambushees.  Looking at the table above, their objective was to make their way down the road and exit at the end with the town, while the orcs entered from the sides, by the hills, and attempted to cut them off. 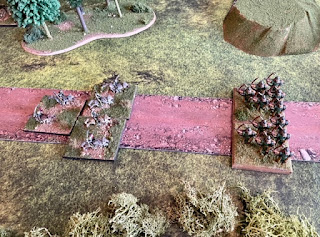 The orcs sent their light wolf riders (with javelins) out to skirmish with the lead humans, but the archers out shot them.  The battle was fought cautiously by both sides…we frequently passed the play on a failed activation roll, but the (dis)honors were pretty evenly distributed, so it didn’t feel like either of us was particularly disadvantaged.  Eventually the Darmish commander’s guard (the axemen) stood off the wild charges of two bands of goblin berserkers before retiring from the field and leaving the fight to the archers.  The archers were equal to the task; eventually shooting drove off all the orc/goblin units.  Casualties among the humans were also heavy, though, and the game was pronounced a draw.
Again, I neglected to take enough pictures for a proper battle report.  At any rate, though, I’m glad to have that behind me, and will return to map maneuvers this week, as the first campaign season in the Northlands winds to an indecisive close.
I’ll leave this as a teaser: 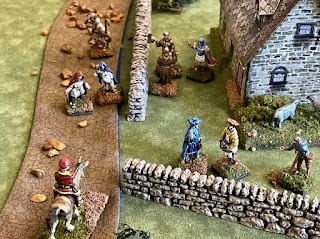