This is just a teaser for the latest thing that has caught my attention.  I have been acquiring various vintage Schneider semi-flat toy soldier molds, mostly in approximately 45mm, and I think there are now enough to put together some sort of reasonably historical Franco-Prussian War project.  If things don’t cast well enough, I suppose I’ll have to field what I do get as a late 19th Century imagi-nations thing. 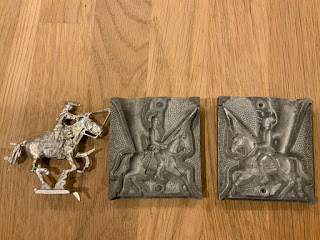 There will be more about the Schneider molds in a future post, but, as can be seen, the smaller size of cavalry is a bit smaller than a Prince August 40mm semi-flat figure. 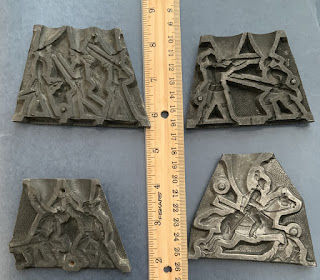 Along with the 19th century figures, there are a few knights, farm animals, zoo animals and so forth. I cast a bunch of farm animals for use with the Not Quite Seven Years War figures in one session last summer.  With the new lead-free alloy I was using, they generally cast well, so I have hopes for this.  Until the weather warms up and I can take the casting gear outside, though, I won’t know for sure.