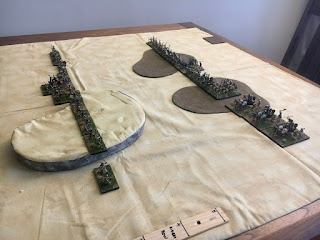 My sons and I got together yesterday on Google Meets (Hangouts is apparently dead) for a couple of games of remote DBA.  I hosted the first game, with the two of them playing, using my new Libyan chariot to command a Libyan army.  For those conversant with DBA, this is army I/7b, and I don’t have the figures done yet to provide any choices, so all the warriors were deployed as “auxilia” and there was a Sea Peoples stand rather than a second chariot.  There were up against later New Kingdom Egyptians (I/22b) whose only choice is whether to deploy the Sherden guard as “fast” or “solid” blades.  William was in command of the Egyptians and elected to make them “solid”.  A dice off for attacker/defender and for terrain left the Egyptians invading Libyan territory, so they were away from the water in a wilderness of rocky ground (represented by the brown cloth shapes) and a difficult hill.  Since we often have a hard time seeing things remotely anyway, we kept the terrain layouts pretty simple. If this were a convention demonstration game, it wouldn’t be hard to improve the table dressing. The Libyans deployed with most of their more capable troops to the left of the hill, and covered their right flank by deploying their skirmishers on the difficult hill.  The Egyptians were impeded somewhat by their need to carefully pick their way through the rocks and scrub.  They were deployed with most of their chariots out on their left flank in a bid to demoralize the enemy quickly by taking their camp. 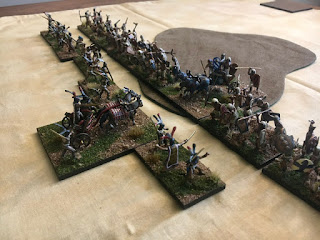 Eventually the battle lines met at the edge of the rocky ground.  The Libyan swordsmen wilted under the hail of Egyptian arrows, losing one of two stands as soon as they were within range.  The usual DBA shoving match started, and the Libyans rapidly lost their fourth stand, ending the game.
I don’t know for sure what the screens showed at the far end.  For these family DBA games we have generally supplemented the  screen view with occasional cell phone pictures sent by text message, to clear up any difficulties in understanding the tactical situation: 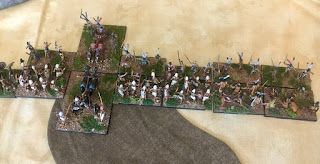 We played a second game, with Arameans (I/6c) against Syro-Canaanites (I/20b) using Norman’s collection and board. 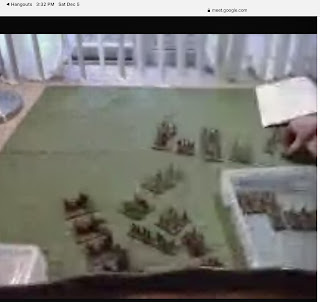 Unfortunately, however, for much of the game, it looked like that.  The Syrians (played by me) quickly rolled over the Arameans (William), aided by the fact that his general died in the first combat round in an attemtp to roll my army up from the flank before my chariots could make a difference.  As he said, in most games he’d have conceded right then, but we’d already be online for about two hours and I suggested that it would probably only take one more turn to actually decide the game by the rules.  I was right...
We wrapped it up after that.  I was glad to see my armies out; perhaps I’ll get a few more painted by the time we are ready for some face-to-face games again.