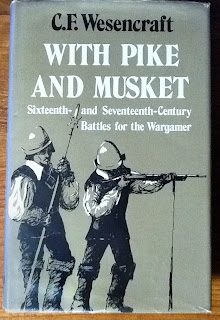 I'm still working on the overall Historicon report, but I finished my look through this prize this morning. I realize that this book has recently been reprinted as part of John Curry's History of Wargaming project. I have been collecting the original hardcover wargaming books for almost as long as I have been involved in historical miniatures wargaming as an adult, about twenty years. I think this was the first time I had ever seen a copy of this book for sale.
I recently purchased an e-book edition of Donald Featherstone's Wargaming Pike and Shot, so it was interesting to compare these two similar books. Wesencraft chose to include a set of rules, similar to the pike and shot rules in his earldier book Practical Wargaming, and a set of 27 scenarios drawn from historical battles. The rules are built around use of singly-based figures, alternating turns, and some fairly generous move rates (12" for the slowest infantry) given that the scenarios are all set for a 4x8 foot table. Given the debate currently rolling through the Old School Wargamers' mailing list, it's interesting to note that the representational scale for each battle is given, and that it slides from 1:10 for small actions during the Elizabethan Irish wars to 1:200 for a large action like Pinkie. Pinkie is alone as a representative of the Anglo-Scots wars, but there are three Irish wars scenarios and the continental battle of Nieuport. The remaining 22 scenarios are from the Civil Wars, with a mix of obscure battles and the "big names" such as Edgehill and Marston Moor. So, despite the cover blurb, this is mostly for the ECW with just a nod to the 16th century. Given that I have figures for the Italian Wars at the moment and that I sold my last ECW collection, the scenario set in the Featherstone book (15 battles from Ravenna to Dunkirk in Cromwell's era) is probably of more use, although the Featherstone book in its original did not include a complete rule set. Nevertheless, the choice of three scenarios from the Irish wars is an interesting one. I don't know, without an opportunity to try the rules, whether I'd recommend going to any great effort to track this down, but I was glad to fill this hole in my collection.
Posted by Rob Dean at 11:52 AM