My elder son lives about two hours drive south of here.  Usually he and his wife are the ones who make the trip this way, so I thought that it was time to be the travel team.  So, this past Sunday my wife and I packed up the car with two tubs, a bag, and a stack of scenery tools and materials and headed south. 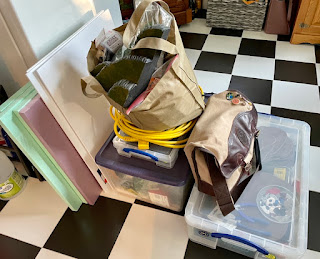 I grouped the materials for a couple of projects in ziploc bags so that I didn’t have to dig for them, and could decide what I felt like doing on the spot. While our wives headed off for a museum visit and antique hunting expedition, we laid out the folding tables and tools and got to work.  For the past year or so, I have been starting to upgrade my scenery by building bases, especially for things that have a tendency to get knocked over a lot, such as trees.

I started with a couple of enclosure bases using up some rather thin stone walls from the Mantic “Terrain Crate” Kickstarter.  They won’t stand by themselves, so this is really the only option to use them.  From our Ghost Archipelago campaigning in 2018-2019, I had a leftover cage for a prisoner (needed for one of the scenarios), which I also based up.  Norman was working on scenery for the upcoming Stargrave game. 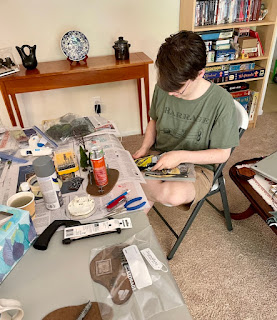 We got three bases each roughed out.  His science fiction bases got as far as priming, and my fantasy bases were somewhat further along (but will need some touch-ups). 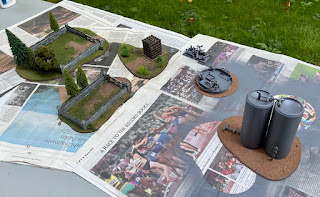 We set all of that aside to dry and broke out the Hot Wire Foam Factory set.  Norman carved a series of hills, and I started in on building the base for the Ultimate Dungeon Terrain following the procedures in the linked YouTube video. 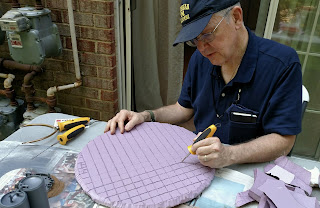 The next scheduled D&D game I’m in is coming up this Friday, so I’m afraid that it won’t quite be ready, but at least it’s well along.
We cleaned things up after that, and then set up a quick game of Hordes of the Things.  Norman had recently completed some dwarves and wanted to try a scenario based on the Battle of the Five Armies from The Hobbit, so he set that up while I was repacking my boxes.

I’ll let him give the details later, but the orcs were facing down an allied amry of dwarves, humans, and elves, with a behemoth representing Beorn and the Eagles (represented as a HotT “God” element) available under certain conditions as reinforcements.  We had time to play and then switch sides for a second play before the ladies returned and we headed out for some dinner
It was a good day overall; I hope to get the touch-ups done and the Ultimate Dungeon Terrain platter finished up this weekend.
.
Posted by Rob Dean at 5:41 AM