I might have mentioned that I am trying to relax a little about the painting, and just do whatever the Muses inspire me to do, confident that I always have plenty of things that have already been painted that I could be playing.

I spent most of my hobby time the week after my previous post finishing up the Ultimate Dungeon Terrain board.  One side is paved in stone: 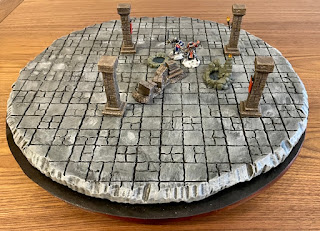 The other side is painted green and flocked for outdoor encounters: 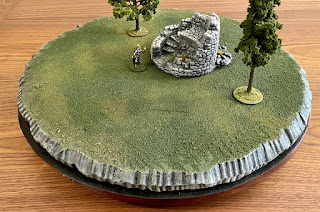 There is a Dungeons & Dragons (5e) game tonight, so perhaps we will have a chance to try it out, even if the scenery assortment available needs some expansion.
I painted a WizKids “bounty board” for potential use with this. 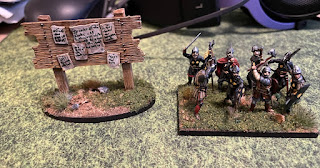 I wanted to try using extremely fine line permanent markers to create the notices. Expecting that they might not be “permanent” to the propellant in the spray varnish cans, I decided to protect them with a layer of  brush-on varnish, and was a little disappointed to find that the varnish was causing the ink to run a bit.  I finsihed it up by dabbing it on carefully, but the notices still look like they have been running a bit in the rain. 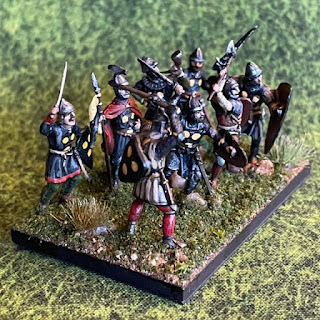 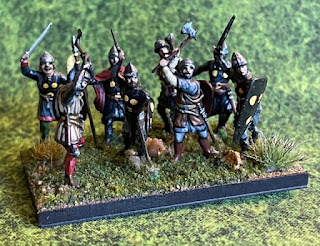 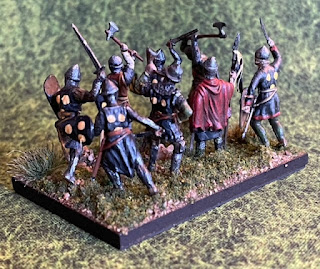 I finally finished a troop of eight mercenaries for the Portable Fantasy Campaign.  They are mostly Italeri Knights with a couple of supplementary figures thrown in.  When I started, I thought that the livery (sable, three bezants) would be simple to paint, but it turned out that putting down that many clean circles (or almost clean circles) was harder than I expected, and they kept getting set aside.  I finally completed them by the expedient method of painting one figure at a time to the finish.
Inspired by that success, I decided that I would paint some more stands for this project.  My order of battle says that I want a few spear stands, so I dug out a box of Strelets Medieval City Levy. This is a mixed box created from two of their earlier sets, one primarily spear armed, and one with a variety of mostly two-handed melee weapons, 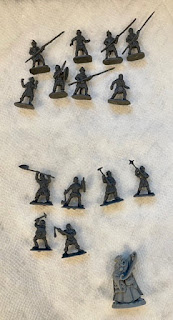 Naturally, I couldn’t leave well enough alone and just take the spearmen, but selected a group of other weapons as well. 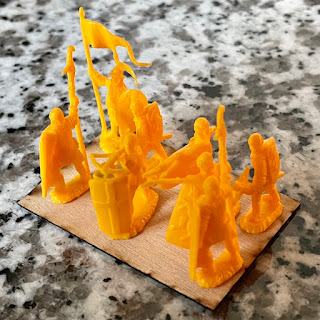 I also picked a group of 8 figures, with mixed polearms, pavises, and crossbows, from the Ultima Ratio Italian Militia set.  I posed them on a standard 60mm by 40mm base before getting started, to make sure that they would fit, and so that I would have an idea of how I wanted them to look when I finally finish them.
I had a slight skating mishap (toe pick!) last week, so using my lunch breaks at work for painting this week, rather than some sort of exercise, seemed like a good idea. 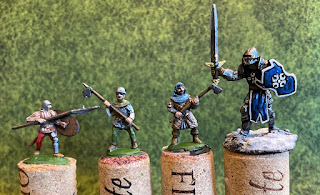 I finished three across two days, one Ultima Ratio militiaman (on the left), and two of the Strelets city levies.  They are shown here with a standard Reaper figure for size comparison.  As usually, I put a coat of thinned acrylic varnish on with a brush, to protect them while waiting for the rest of their stands to be finished.