“We’re sorry, all available Muses are busy inspiring other artists...

...Your inspiration is important to us.  Please be patient, and you will be inspired by the first available Muse.”

That’s what it has felt like this past month.  However, I mentioned in my Gencon post that I had the opportunity to play in a session of the Prince Valiant roleplaying game.  After the convention, I ordered a boxed set of the first three volumes of the Fantagraphic reprints of the Prince Valiant comic strips, covering the years 1937 to 1942.  When I reached Volume 2 and saw this cover... 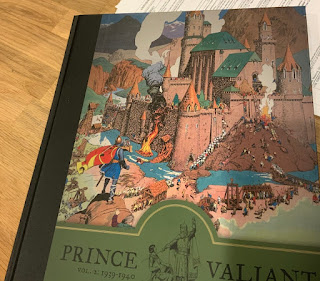 ...my call to the Muses was answered.  (I might note that I feel like this falls within Calliope’s portfolio for “epic” rather than Clio’s portfolio for “history”.)  In fact, my cup has overflowed slightly...

Last year at Barrage in September, I picked up a Zvezda “Royal Castle” model.  It was rather large and intimidating, so I went out looking over the usual sources for something a little smaller, and turned up one of these “Medieval Castle” models as well.  I have several boxes of Zvezda siege machines, inclujding two siege towers, a trebuchet, and four or five boxes of the smaller pieces, such as ballistas, rock throwers, rams, and mantlets, all in 1/72 scale, of which I have great store. 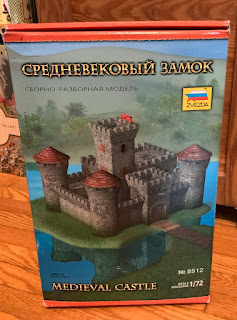 In fact, my son Norman recently posted about the Zvezda ballista he’s finished for his Mongol army.  So one possible route which the Prince Valiant inspiration could take me is down the path of expanding the 1/72 medieval/fantasy project to include the castle(s) and siege engines as scenario seeds.  I would not end up using the Prince Valiant background, but would translate this into the ongoing Northlands/Portable Fantasy Campaign.

However, there is another somewhat reasonable possibility for a more direct inspiration.  Back in the 1990s, when I was first gaming with large scale figures, I bought a bunch of 60mm knights and such, classic toys whose molds had been put back into production.  Most (all?) of them were Marx Robin Hood and Sheriff of Nottingham figures, and various Reamsa and Jecsan figures from Spain and France.

This was a project which mostly did not pan out, mostly because the conceptual space for it ended up occupied by the Medieval Mayhem project.  I had at one point intended to get the kids involved, and painted character figures and retinues for each of them.  I think we got one game in before it got set aside. According to my game logs, I hosted one game for a HAWKs meeting in 2004.  I had, in fact, decided to sell them off a year or two ago, so I pulled out the two character figures for my sons, handed them off to them for display, and boxed up the rest, along with the stock of unpainted figures. However, nobody bought them, and I brought them home (all 60 foot figures, 2 mounted figures, and the unpainted stocks) and stowed them away again.

Now, Ross Macfarlane has his Prince Michael project using 40mm Elastolin figures, so I knew that Elastolin once had a license for Prince Valiant figures, which they made in 40mm and 70mm.  However, I also recalled that somewhere in my unpainted stock of 60mm figures, I had a Reamsa Prince Valiant figure. I have no idea whether it was a pirate copy, or whether they had a propoer license.  Anyway, I did a little basement archaeology, and found these two: 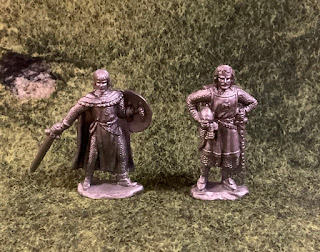 The Valiant figure, on the left, is not quite in the same pose as the Elastolin, but Sir Gawain is nearly identical.  So, it would appear to be possible to do something with those, in a skirmish line, given that I already have 60+ figures painted ... We’ll see what the future holds.
Meanwhile, I’m into Volume 3, and a boxed set of Volumes 4-6 arrived this week.