While I have been casting about for inspiration this month, one other idea (other than Prince Valiant, that is) has been given a new push.  I have noticed recently that there are now two boxes of soft plastic 1/32 scale fatnasy creatures available on Amazon (and probably elsewhere). The Series I box was $20, and the Series II box was $25, within my impulse purchase range, so I decided that I would order them and have a look. 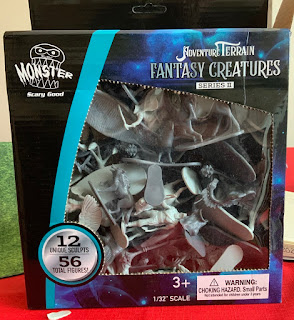 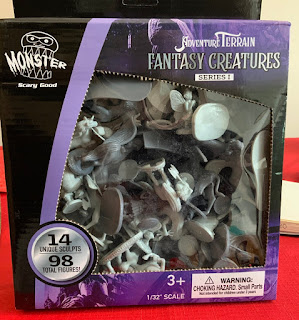 Series I contained orcs, griffins, skeletons, unicorns, minotaurs, wizards, dwarves, two headed somethings, snakey medusas, dragons, centaurs, knights, faeries, and elves, in a mix of light and dark plastic. Numbers were fairly even; 7 of each although I was apparently short a faerie.  For scale, they are shown below with a knight from Accurate Miniatures from my Medieval Mayhem collection. The sculpting on the figures is fairly basic, but the human-sized creatures are not a terrible match.  The dragon is a bit small, and would probably be more comfortable looming over some 1/72 scale figures.  There are no pose variations, so any units would end up with a bit of an old school Minifigs aesthetic going on.

The Series II figures were more of a mix.  They included Cerberus, Amazons, frog-men, wolves, lizard men, cyclopes, a second unicorn pose, a headless horseman, a phoenix, a militant mermaid, a berserker, and a harpy.  The numbers were more random.  I was short two figures of the 56 promised, and had 1 Cerberus, 2 phoenixes, and 2 frog-men.  As with Series I, size of the humans is a reasonable look next to the Accurate knight.  The cyclops, like the dragon, would be happier with the 1/72s, and one phoenix may also find his way into that project as a roc. 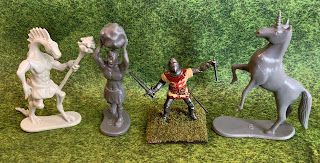 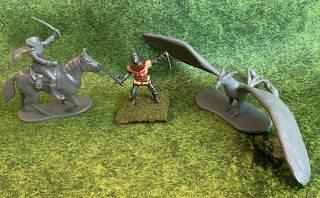 The plastic is pretty soft, so a test of paintability will need to be done.  There are plenty of spares of things I won’t need in units to test compatibility with spray primers...
I’m not sure what I would use for rules; adding a bit of fantasy to Medieval Mayhem seems possible, and playing Dragon Rampant (perhaps with half-sized units—a default of 6 foot or 3 mounted rather than 12 or 6).
In addition to these new figures, I also actually have a bucket of plastic toys laid by when Toys R Us closed out in 2018.  They had a bucket of Mythical Warriors in their “True Heroes” line (there’s a mis-naming...).  It had included 7 different figures, a female rogue, a hero, two witches, an orc, an elf drawing an arrow, and a dwarf(?) with a hammer (who is big enough to pass for human, so possibly equally usable as a berseker). 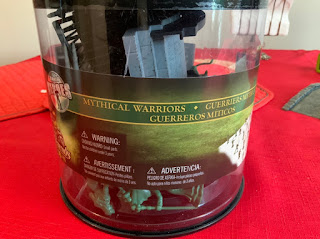 Each bucket included some rudimentary toy scenery; a bridge, a couple of pillars, a prisoner cage, some rocks, some machine gun nests (?) and a pile of candlesticks, plus an odd structure I’ve dubbed the “mystic gateway”. 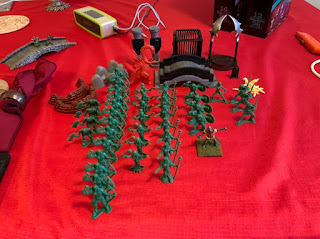 As you can see from the picture above, the mix of figures was pretty random.  I got one rogue, three heroes, four orcs, and thirteen elves. 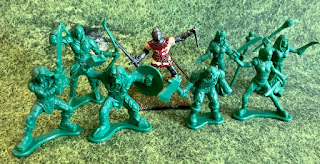 They also are not a bad match for the Accurate knight.  Unfortunately, with Toys R Us out of business, the molds are currently idle, so there’s no chance of acquiring more rogues or orcs.
There’s more to follow on this, but I am enjoying considering whether I could finally have a 54mm D&D game...
(For the record, I am aware of Irregular Miniatures 54mm fantasy line...I may end up with some of those if I do get started on this; the humans tend to be rather taller than the Accurate figures, at least going by the Irregular 54mm medieval civilians I have for Medieival mayhem.)