As described in Part 1 and in Ross's blog, we have decided to work on the French Revolution, with the intention of putting the combined results on the table at Huzzah next year (15-17 May 2020) in Portland, Maine.  The target rules are A Gentleman's War (AGW), which gives us a basic structure of 12 man infantry units, 6 man cavalry units, and cannons manned by about four crewmen to work toward.  For a two-player game, the rules recommend using 6-9 units for a "small" army.  Based on our combined decades of convention gamemastering, we would anticipate that players will have "enough" to do if they are each commanding 3-5 units in a multiplayer game, especially if we are generous with the cameo roles and use the distinctions rules.  Six players seems a solid goal for Huzzah, and that translates into 18-30 units, of which we currently have five.  It would seems that we have our work cut out for us...

Having done these calculations, the weather last Monday, on Memorial Day, was beautiful.  My son Norman and I played out the AGW game previously reported, and he headed home.  I took my casting gear outside and prepared to add some reinforcements.  Apart from a test session with these molds a couple of weeks ago, it's been quite a few years since the Meisterzinn multi-part molds in my collection have been in serious use.

Years of experience with casting has taught me that there are variables over which I have no control, so that on days when certain molds are working well, I make extras, because there is no guarantee that things will work again the next time.

I spent three or four hours casting, cycling through three or four molds at a time, enough to allow the casting to solidify before opening the mold, but not so many that the molds got "cold" (it's all relative when you're pouring metal at 600+ degrees Fahrenheit).  The walking/trotting horse from mold 1322 was having a good day.  I was getting a better than 90% success rate on pours, so I made about 20 of them.  The galloping horse from mold 1325 almost never works.  I tried six or seven times and didn't get close to a complete casting.  This is why every horse already done for this project is a 1322, and it looks likely that every new horse will be too.  I wasn't sure what cavalry I would be making, and a have a handful of the hussar bodies already around, so I only cast three hussars and seven cuirassiers.  They also generally cast easily, so getting more later should not be a problem.

Mold 1324 makes an advancing infantryman and a standard bearer.  Past experience is that both of these figures cast fairly reliably.  Unfortunately, one doesn't need that many standard bearers, and the hands are in a position opposite that of a right-handed shooter holding up his musket.  I have occasionally filled out a unit by sticking one in anyway, but more often I have used this casting as a figure loading.  If you put a section of fine wire in the right hand as a ramrod and a musket with the butt on the ground in the left, he's passable.  However, I didn't plan on doing that so I only poured that mold cavity a couple of times.  The advancing figure (as I'll show below) was working well, and I was able to make 21 of them, with a solid 90+% success rate.

The other molds were more troublesome.  I lost track of how many times I tried the firing poses mold (1329), but I got 6 usable figures (three of each), none with bayonets cast, after at least a dozen attempts, so a success rate of of under 25%.  I ended up with 4 good examples of the marching infantryman from mold 1321 after at least eight tries, and they were mostly from the first few tries, so I set it aside for another day.  I tried 1326, the civilians, and got a couple of women, but the man wouldn't cast.  The bandsman, 1332, as usual, would not cast at all, although I got more cocked hat heads, as used for the British below. 1328, an officer with cast in lapel detail (so of a later style than the officer in 1321) was working, so I made 3 of those.

Overall, I ended up with horses for three new cavalry units, or a little more if the existing 8-man units are expanded to 2 6-man units, two uniform pose advancing infantry units, and enough assorted castings to staff a third unit, which brings up an artistic/aesthetic question, to be discussed below.

On Friday, a day I had off from work, I sat down and started to assemble pieces.  I have a cache of fifers from years past, and the fifer mold (1323) at least used to cast fairly reliably.  So I decided that the first unit up would extend the available bodies a bit by consisting of 12 men, including an officer, a flag, and a fifer.  A drummer would be better, of course, but Meisterzinn does not have a drummer with a normal military drum--even the bandsman, if one could get it to cast, comes with a choice of a snare drum or a bass drum.

Here is a 1792 infantryman from Vol. 1 of the Funcken Lace Wars book. After discussions with Ross, I concluded that the best match for the transitional cocked hat from the available Meisterzinn heads was one that is included only in the bandsman mold. 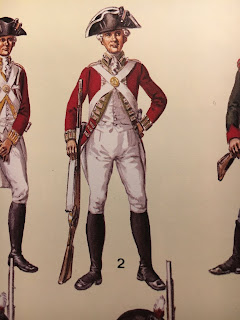 With as many figures as we are proposing to add, it is going to be necessary to keep the piece-by-piece conversions down to a minimum, so the goal is to be "recognizably close" to the historical figures.  So, sometime in the 1780s the British went from gaiters reaching above the knee to gaiters below the knee.  I am not attempting the file the castings to reflect this.

By Friday evening I had the whole unit assembled.  I glued them to craft sticks (aka tongue depressors) for ease of handling.

I got up yesterday morning and primed them with a black spray primer.  I considered using white, given the British colors, but I appear to be out of white primer at the moment, and I didn't want to go out in search of more at 0600.  I would expect that I would have started by running a black ink into crevice and shadow areas, but that experiment will need to wait until later.

After spraying the primer from six directions and giving it time to dry, I started in on painting.  I am more or less attempting to match the style I used on the existing figures.  After putting one a coat or two of the basic colors, I took one infantryman and finished him up.

I used the distinction colors and a simplified version of the button lace pattern from the 37th infantry regiment, one of the ones deployed for the Flanders campaign.

Today my plan is to see if I can finish the rest of the unit (minus the actual flag, most likely), but if the weather is good, I might see about more casting.  The next unit up is probably going to be some approximation of British light dragoons, for which I believe I have the parts already cast.  At that point, the Coalition will be ahead in strength, so I would hope to alternate between Coalition units and French units.

If the casting success rates remain constant (not usually a good assumption), I am eventually going to have to deal with the aesthetic question of how uniformly posed I want the units to be.  An all-advancing unit, as shown above with the British, is likely to be fairly easy.  A firing line unit of an officer, a flag, five kneeling shooters and five standing shooters with complete bayonets is going to be nearly impossible.  The existing units, as shown in Part 1, were intended for an individual figure based skirmish game, so I wanted them to be as mixed as possible, in case it was necessary to easily identify individuals.  Going forward, I would like the French to present a more irregular appearance, and they historically used more skirmishers, so there may be French units which are half shooting/half advancing.  If the firing figures continue to be rare, though, I may reserve them for special units, jaegers or other light infantry, and it will probably be necessary to fill things out with standard bearers posed as loaders.

By the end of the outdoor casting season in September/October, I would like to have all of the pieces and parts wanted for the Huzzah game.