According to my shipping records, I received my copy of A Gentleman's War (AGW)(by Howard Whitehouse and Dan Foley) back on the 24th of April.  Having seen the pre-publication versions of the game being played at conventions, I anticipated that it was going to cover the later 19th century, and that I was just buying it out of curiosity and a love of toy soldiers.  However, while it was on order, and before it arrived, I was playing a remote game with Ross.  I mentioned that I had AGW on order, and Ross told me that the rules also covered the 18th century.  So, instead of needing to go out and buy a bunch of late 19th century toys, I knew that I would be able to play as soon as the rules arrived. 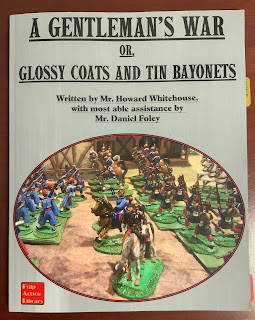 As noted in my Huzzah report, Ross and I had the opportunity to try the rules out a couple of times with the figures we had brought to the conventions for our "official" scenarios.  I tried a third game with my older son, on my relatively compact home table a couple of weeks later.

With the preamble out of the way, what about the rules?

I got the softcover version from Amazon, at $30.  There's also a hardcover available, at $40, which suggests this is a print-on-demand product.  Personally, I haven't had any problems with PODs, but you would have to decide whether the hardcover would be durable enough to justify the $10 price difference.

The book weighs in at 112 pages, including hardcopies of the quick reference sheets without page numbers in the back.  The sections are an Introduction (2pp), Building Your Army (12pp), The Country (i.e. terrain, 2pp), the Rules of the Game (28pp), Engineering (2pp), Scenarios (6pp), A Guide to Armies (of the H.G. Wells era, 9pp), On Colonial Matters (rules and army guidelines, 25pp), From Flintlocks to Needle Guns (earlier period rules, 2pp), Cameo Roles (5pp), and the balance is various flavors of designer's notes (9pp).

The authors' intent is to provide a pleasant relatively quick game using large scale figures (40mm or 54mm are the default) with an updated Little Wars flavor.

In the Army Building section, we find that, while variations will not break the flavor and flow of the game,  cavalry is deployed in 6 figure units, infantry is deployed in 12 figure regular units or 6 figure specialist detachments (e.g. engineers), and artillery is deployed as individual guns with 3-6 crewmen (more for the odd siege gun).  There is a point system to use if desired, with units having a base cost modified for "distinctions" (special abilities or disabilities, like better, or worse, shooting or morale).  So far, the games I've played have been built around symmetrical forces, so I don't know whether the points would hold up to a determined assault by players intending to squeeze every possible advantage from the system.  Most points systems won't, so don't do that.  Armies are divided into small (6-9 units), medium (10-13 units), and large (14-18 units).  The Country chapter suggests that the table width needed to accommodate those army sizes would be 3-4, 6, and 8 feet wide respectively.  For those that don't want to use the points system or deploy symmetrical armies, there is also a random army generation table, where armies are determined to be field forces, advance guards, or garrison forces, with a few core units, and additional units are randomized, with the three types being balanced, cavalry-heavier, and infantry/artillery-heavier respectively.  Ross and I tried that with the second game we played at Huzzah, and ended up with perfectly symmetrical forces anyway. C'est la guerre... I should also mention that basing is discussed in this section.  It is anticipated that you will not wish to rebase your troops, and the default expectation is that you are using individually-based figures on approximately 1" wide bases for infantry, and perhaps a little wider for cavalry.  (That happens to fit with my existing NQSYW collection perfectly, so Bob's my uncle, as they say.)

The rules are generally conventional, and the authors acknowledge the influence of Larry Brom's The Sword and the Flame and various versions of Ross's With MacDuff to the Frontier.  A card deck (with jokers) is used for activation, with each side being assigned one of the colors.  The unconventional part of the activation rules is that there are no turns, per se, and as each side finishes a cycle of activating all of its units (including dead/removed ones), it can start over.  Units activate one at a time, except that up to four units can activate at once if a face card is drawn, or if a general is attached to one of the units.  An ace will allow you to activate a unit previously activated in the current cycle.  The first joker ends restarts both players' cycles and the second does the same and also causes the deck to be reshuffled.  There is an interesting hold card mechanic; each player is allowed a limited number of hold cards which can be used to interrupt the turn sequence, to gain extra abilities in a charge, and to allow additional charge responses.  It took me a while to really pick up on the flow of this, which is my problem rather than the rules'.  Generally speaking, it looks like you want to hang on to a good hold card for a charge response, and that cycling your units as quickly as possible should be your goal.

Movement is where the TSATF influence is strongest; moves are in dice thrown, with 2 dice for infantry line movement and and 5 dice for light cavalry charge movement being the usual extreme ends.  Doing things like changing facing, changing formation, or shooting reduce the movement by a number of dice.  Personally, I like this as a mechanic; it abstracts a lot of fussy terrain definition and command and control representation into something I can remember and use without looking at tables.

Fire combat is done by throwing a handful of d6s, one per 2 infantry or 1 artillery crewmen, with a target number based on range.  Each hit gets a saving throw based on target type and cover status.  A full strength infantry unit in line is going to get 6 dice of fire, and would need a 5-6 at short range (half the maximum), so would have an expected value of two hits.  Against another line in the open, the saving throw would be a 5-6 as well, so 2/3s of a figure would save; leaving an expected value of 1 1/3 hits.  With numbers like that, units will typically stay around for a while.  With the default 1890s technology of the rules, long rifle range is 24", and extreme field gun range is 72", which is a significant chunk of a 5 foot wide table.

Melee combat is a bit more involved.  There is a list of circumstances providing advantages of 1-2 points.  The advantage status of the unit (+2 or more, +1, Tie or lower, tie or lower and disordered) gives the target number for the melee.  The saving throw is collected from another table in which the results (doubled, more casualties, indecisive; I'm paraphrasing) and the melee type (cavalry vs infantry, etc.) are cross referenced.  This feels a little fussy for a d6 toy soldier game, and one definitely wants to have a copy of the table in a quick reference sheet for each player, but it's not too slow overall, and gives a wide range of possible results.

Morale is built into the melee results, but in other circumstances is checked at 1/3 and 1/2 casualties with a d6 roll, giving results from "run away" to "carry on".  There are two lines to the table, "bothered" and "disconcerted", and when I customize the quick reference sheets I'll add something about disconcerted being disordered, routed, or below 50% and bothered being anything else, because I'm having a little trouble remembering that at three games in.  I'm sure it will stick eventually.

There's a short summary of engineering tasks for special scenarios, weighted toward things that wouldn't take too much time (i.e. demolition over construction).  Time is measured, when necessary in cycles for short things or jokers for longer things, without attempting to give real time correlations.  Given the level of abstraction, that seems reasonable.

There are short descriptions of nine general scenarios, with some information on force balance and objectives.  While these should work, I haven't tried them yet, nor have I tried translating the general scenarios from the C.S. Grant books into these rules yet.

The guide to armies section has some suggestions about the translation of historical troop types into game terms, plus some suggested likely distinctions and deficiencies for the types.  Britain, France, Germany, Austria, Russia, Turkey, and the United States get write-ups.

The colonial section has the same sort of information on the great powers' colonial armies, plus rules for additional troop types such as porters, tribal infantry, tribal cavalry, and obsolete artillery.  Tribal units are half again as large as regulars, so based around 18 foot or 9 horse.  I would have to try it to see (using my existing 25mm colonials), but it feels like the larger units would probable lead to a wish for a larger table size than for the regulars.

The main effect of the Flintlock to Needle Gun rules is to add optional loading (I've tried two games with and one without; doesn't seem to be necessary, but it's there if you disagree) and to shorten the weapons ranges.  All three games I have played so far have been with the flintlock-period weapons tables.

Once you have the rules and the distinctions firmly in hand, the Cameo Roles rules add a touch of whimsy.  There are a number of possible roles, ranging from civilians who impede traffic to spies who affect initiative cards to the regimental mascot who can add to your melee capabilities.  The intent of these rules is to give an excuse for all the odd miniatures one might tend to collect.  As someone's whose miniatures collections includes livestock, civilians, marching bands and what not, this looks like fun, although I haven't had a chance to try it yet.

The book finishes up with a discussion of philosophy.  The intent is to provide something fun and not too serious, with what I might describe as a neo-Wellsian aesthetic, all goals which I support.

My initial experiences with these rules have been very positive, with the caveat that I'd like to tweak the quick reference sheet.  They have the advantage, from my point of view, of allowing me to use them with my existing 40mm collections (including the odd stuff) immediately, and to play games that feel enough like the Charge! battles that I'm used to to be satisfying, and to do it in a significantly smaller space.  With my recent move having left me with a smaller space, that's a plus.

(And I just started expanding the French Revolution project and ordered a bunch of 40mm Franco-Prussian War molds, so you can see I was hooked.)