As I noted previously on this blog, some gaming with my elder son in March left me with an itch to do a campaign.  I therefore sat down to do some reading, and pulled out five books from my collection that seemed pertinent.  These were: 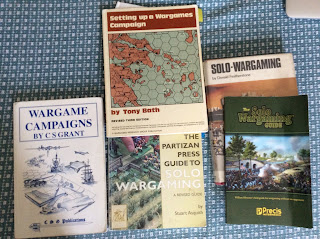 Thus fortified by the wisdom of those who have gone before, I started considering how much record keeping I wanted to do, and what my goals were.  I have reminded myself periodically that my goal is to generate some interesting battles when no opponents are to hand, and to help to keep my painting focused on a broader goal of having this whole project available for conventions someday in the next few years.

Recalling that Hordes of the Things will be the army-level rules of choice, and that I intend to spice things up with Dragon Rampant games which will affect the outcome of the larger army-scale gaming (with skirmish games a possibility, but only rarely being something that would have a lasting effect at a higher level), I set down some preliminary thoughts on scale and record-keeping.

Having drawn the map, I started doing some calculations.  For purposes of the campaign, I wanted to use an area movement system, and have the turns be approximately a week.  With a movement rate of one area per week, this would imply a typical distance of about 50 miles across an area.  The map is about 7x10 areas, or about 350 by 500 miles. 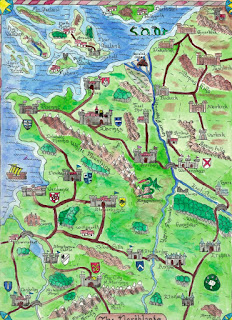 That is approximately half the size of France, an area which might have contained 6 million people before the Black Death.  If 5% were available for military service, that would be about 300,000 fighters.  Given that there are five countries on the map, if each had a 12 element Hordes of the Things army, each element would represent about 5000 men.  I typically imagine a HotT stand as about a thousand troops, and we are therefore in the right order of magnitude.  Let's assume that the population is only half of that, since it's going to be a turbulent period, and that each country can field two armies.  That would make each Hordes stand about 1250 figures, which is going to be close enough for a fantasy campaign which will not involve detailed logistics calculations.

This set of calculations implies to me, by the way, that the cities marked on the map are only the major population centers, and that there are undoubtedly a lot of smaller cities/towns/castles that are not represented.  At some point, I'll have to think about what that implies about sieges and control of territory.

I could probably handle the paperwork involved with the idea that each territory has some inherent "value" and that the tax points collected each year are 5-10% of the total value.  The reason to do this would be to reflect the effect of raiding warfare, where a successful raid would produce tax points immediately and reduce the overall tax base of the area, so that things would gradually wear down unless some sort of reinvestment was made.  I'd probably want to start each country with some sort of reserve treasury. Ross Macfarlane suggested to me that I could probably just let the tax value regenerate after the collection season, so that raids would have to be sustained to keep a province's value depressed.  That would certainly take less record keeping.

The next question would be what the scale of a Dragon Rampant unit would be.  I am thinking that it would be hard to justify more than about 100 men per unit (so a ratio of about 1:10 against the figure representation on the table).  That would make a Hordes element worth 10 Dragon Rampant units.  So it would be a reasonable amount of bookkeeping to track the results of DR battles at the larger scale.  If a HotT element has lost 6 DR warbands it would round down to being undeployable in a HotT game, but from 0-5 DR warbands lost, it would round up to a normal HotT element.

I have some thoughts about how to handle raiding/looting/chevauchee in more detail, but I think that will wait for later.

My hope is to kick this off soon with a Dragon Rampant scale game involving the forces of the Baron of Rienne against an increasingly organized company of bandits attempting to build a fort in the Debatable Marches.  The bandits will be "free", but I'll record any results against the Baron of Rienne's forces.  Whether there are follow-ups and what they are, of course, is what makes a campaign.

I might also note that I have been brainstorming ideas for role-playing game scenarios using this map, and the broader military campaign will potentially be interwoven with any games which result.