Dux Bellorum, back around for some more work

In the week before Gencon, I got Rosemary Sutcliff's book, The Shining Company, off of my shelf for a reread.  If you aren't familiar with it, it is a retelling of The Gododdin, an early Welsh poem about a band of heroes who almost all died in a battle with Saxons.  Like all of Sutcliff's books, it's very atmospheric.  The battles could be refought without too much trouble using Dux Bellorum, so I thought that it might be a good time to dust off my stalled Dux Bellorum project.  I took a few figures along with my portable paint kit as a backup, but didn't use them during the convention.

This week, though, I had to take my car in for some maintenance, so an enforced time to sit seemed like a good time to get some painting done.  Four of the figures on this stand were finished over a year ago, and have been awaiting the second four to complete the stand, which I polished off during the maintenance (I should note that they were partially painted, so I wasn't starting from scratch): 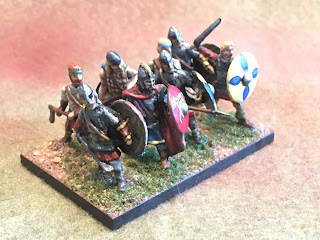 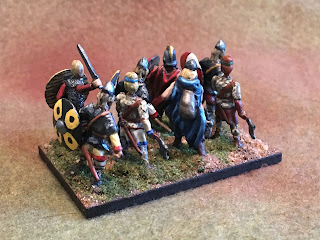 As with the rest of the war band in process, all the figures are made from Prince August or Dutkins molds.  They are a mix of Dutkins unspecified Roman and Barbarian molds, Prince August's 25mm fantasy molds, and the mostly discontinued Prince August ancient armies multiple part molds.

I also finished up a mounted standard bearer, a Dutkins figure with a Prince August head on a Prince August horse, leaving me two more riders to go for a stand.  At that point, they told me my car was ready...

My original minimum Saxon war band was going to have the one mounted stand, three "noble" (better armed/armored/motivated) warrior stands, three "ordinary" warrior stands, and two skirmisher stands, and I am now short one "noble" warrior stand and the riders.  Inspired by completing these figures, I sat down with my large box of Prince August castings to see if I couldn't put together the third noble warriors stand: 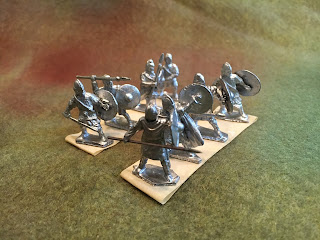 While I'm not getting too worried about archaeological correctness, I am still depicted these with a front rank of armored figures and a back rank including some less armored figures.  I glued them to sticks and primed them after this picture was taken.

I still haven't played enough Dux Bellorum to know whether that war band composition is going to give a good game, so, as long I was doing metal work, I started turning out a few more ordinary Saxons. 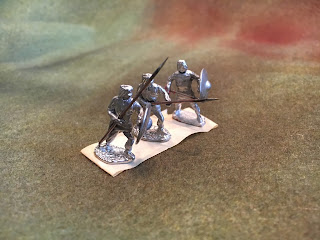 Their opponents are due to be some Romano-British and/or some Late Romans, so I've also started putting a few of those together from the Prince August ancients molds: 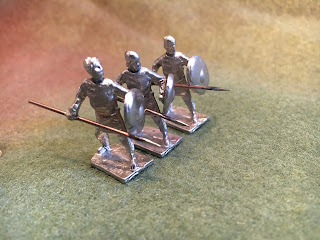 Those armies are permitted to blend by deploying allied contingents of the other, so I would like to get them on the field faster than the Saxons have gone.  The Romans have a few specialized units available, and I did a conversion of a Roman horse archer the last time I was doing metal work for this project.  A bit rough, perhaps, but I only need two, and I'd mostly like to keep this project in home cast figures. 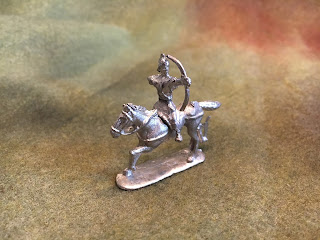 I looked up the first Saxon stand; I posted it here in October 2014, nearly three years ago.  The exception to the home cast mandate will be for Ross's figures. Ross gave me some Romano-British from his collection a couple of years ago, so I think it's high time to get them rebased and refurbished to fight the encroaching Saxon hordes.

I like the idea of getting something historical done again; it's been fun getting out the vintage fantasy lead, but it has ended up as a somewhat all-consuming project for the past two and a half years, and I'm getting the itch to mix it up again.