Then a soldier, full of strange oaths, and bearded like the pard, jealous in honour, sudden, and quick in quarrel,
seeking the bubble reputation even in the cannon's mouth.


So spake Jaques, exiled lord of Duke Senior's court, as recorded by the Great Historian in his account of the civil strife of Arden, As You Like It. 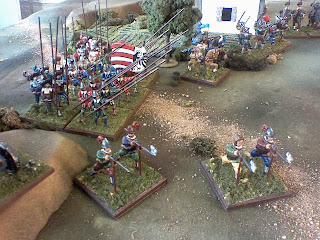 I am sorry that it has been over two weeks since my last post.  In that time I've been to Michigan and back for a reunion of my college music group (see http://jeffcaminsky.blogspot.com/2010/04/brothers-in-song.html for an eloquent account and a link to one of the pieces we performed), done my taxes, and turned in two freelance jobs.  I've been carrying around Stuart Asquith's book on solo wargaming without making much progress.  I've borrowed a couple of antique molds for 40mm semiflat farm animals for near future use, to enhance the NQSYW battlefields, but I'm about ready to give the 18th century a brief rest.

I've still got the terrain from Schlegel's Gasthaus on the table, but I have pulled out my 40mm Renaissance figures, cast from Nuernberger Meisterzinn molds. (See examples above, from a game with Ross prior to Cold Wars 2009). When I log off here tonight I intend to at least set up a solo scenario (my one at-home son being busy with homework tonight).

I've got 43 stands of troops, which is a little slight for a game using Ross's Rough Wooing rules, but I've tentatively divided them into two forces (leaving off 3 of the 4 guns) and have drawn up a rudimentary scenario.  The story background is that this is an incident in the events that caused Duke Frederick to replace Duke Senior at the court of Arden, but more on that after there's actually been a game...
Posted by Rob Dean at 7:29 PM