Our final game of the St Michel campaign was scheduled for 6:00pm Saturday.  That gave us a brief opportunity to rest after we reset the table.  By that point in the convention, I must admit that I was glad not to have to redo the scenery.  We did a pretty good job of keeping things organized as we went along.  Nevertheless, the setup table we were using was looking a little unsightly as we launched into this last game. 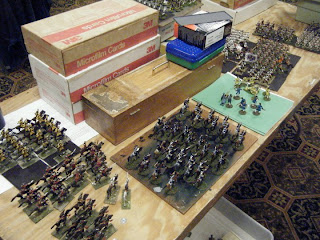 Once the defenders were laid out, we helped the players along by adopting a reasonable order of march for the retreating Pragmatic Army.  Had we had a continuous player presence throughout, we would have asked them to organize this after Scenario 3, without knowing whether the next scenario would involve, say, an attack on the rear guard of the main column.  As it was, we briefed the order to the Pragmatic players at the beginning of the fifth game, and they did not ask to rearrange anything.  We launched into the rules explanation for the fifth time, keeping it short in deference to my croaking voice. 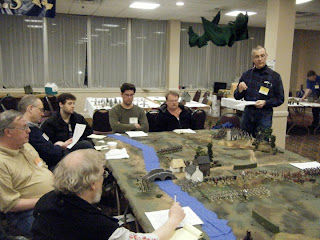 While the players may not look too excited here, I think that was a result of the general energy level at the end of the convention.  They certainly stood up and played with enthusiasm when they had the opportunity.
Ross has already laid out the structure of the battle on his blog (Battle Game of the Month), so I won’t repeat it in detail.  The Northern Alliance forces remaining on the field after scenario 4 had been regrouped and deployed behind the main road, and the game began as the head of the retreating column appeared on the table, led by the Stanzbach-Anwatsch Dragoons in gray.  They spurred forward immediately to engage the Fitzjames Horse, ready for another action following their destruction of the S-B and Wachovian hussars during the counterattack in the previous scenario. 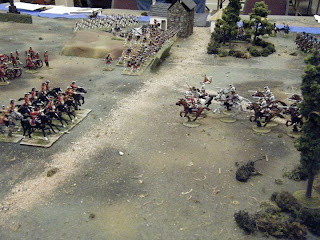 As the cavalry fight developed, the Northern Alliance pursuit force began to appear on the table, and squadron after squadron was drawn into a furball which lasted the remainder of the game. 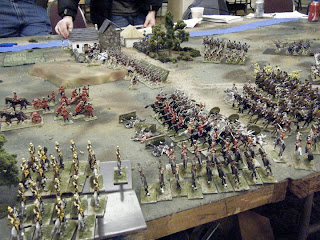 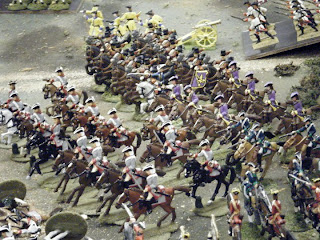 While expensive in terms of casualties, this action, the largest cavalry fight seen in the Not Quite Seven Years War to date, covered the flank of the retreating column for long enough to permit the leading infantry regiments to deploy opposing the Rosmark infantry.  With that covering force in place, and gradually pressing back the outnumbered Rosians, the rest of the column pressed on for the bridge and the sanctuary of S-B territory. 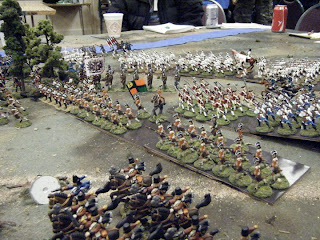 The remaining Schoeffen-Buschhagen infantry, who started the day occupying the much-disputed thatched cottage, supported by the converged Pragmatic grenadiers who advanced rapidly for their position near the head of the column, resisted a final Rosian attempt to seize the bridge approaches.  They then counterattacked, clearing the stone house of Rosians, and thereby firmly opening the path to the bridge.  Meanwhile, Wachovian and Stanzbach-Anwatsch light infantry occupied the orchard, and opened a galling fire on the Rosian defenders, which contributed to the successful assault on the stone house. 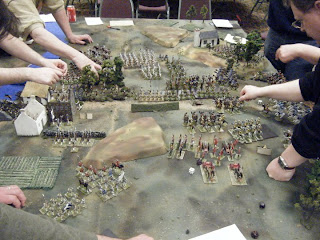 With the retreat route secured,  the game (and the raid) was pretty much over.  Despite the valor of the Pragmatic forces and a tally of tactical successes, the failure to force the defenses of St Michel in the third scenario meant that the raid was unsuccessful, and it was a much downcast army that returned to S-B territory to prepare for the next campaign.
From the gamemaster’s chair, though, I was very pleased with the series of games.  I’m grateful to all the players we had over the weekend for their willingness to play along with the campaign theme even when they didn’t have to live with the consequences of their actions, and I’d certainly be willing to undertake this sort of thing again.  It’s always nice to see all of the work that we put into the troops out on display in its proper environment, and I went off ready to do some more painting, reading and casting...
Posted by Rob Dean at 9:56 PM