On the Origins of the NQSYW 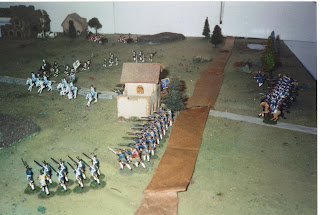 The Battle of the Tollgate
During Ross's recent visit we went digging through a selection of hardcopy photographs of games from days gone by, and I was particularly pleased to be able to put my hands on this picture, taken by Chris (GASLIGHT) Palmer during a game at his house, to try the mettle (or perhaps metal) of our new joint project.  While this is not the best lit shot of a wargames table I've seen, it is what we have.  The brown paper, hastily cut for the layout, running down the length of the table was  representing the dry river bed of the former border; the building was the tollgate that formed the casus belli.   While I am not certain of the exact date for the game, I wrote an account of it on Monday, 26th August 1996. We often played on Thursdays at the time. 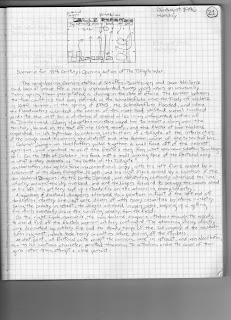 A page from one of my hobby notebooks; I apologize for the hasty and less than neat printing.
Click to enlarge.
As I mentioned in my earlier blog entry on the background of the NQSYW, we hadn't agreed on the name of Chris's country yet, so he got tagged in the write-up as "Saxe-Weilenz", my still future opposing force.  (I'm getting close to painting the first S-W unit, though...I'm becoming eager to see what they are going to look like...and it's only been 14 years...)
A look at Charge! shows the forces as theoretically balanced.  I had two line companies, a squadron of heavy cavalry, a gun, and a light company (plus that half company of the Adelmann regiment in yellow facings in the lower left corner of the picture), with Chris having a second gun instead of a light company.  The Brigadier estimated the value of each at 70 points.  I don't recall how we handled the morale of the half company; our early encounters generally used the company as the morale unit, so I would imagine in retrospect that this scenario should have been dominated by the guns.  I don't think it went over six turns, so it fit into a short evening.  I'd encourage anyone considering Charge! to give it a try, even with limited forces, though I'd limit artillery to a single gun for any scenario of less than 4-6 infantry companies per side.
I hope to have something on St. Michel, scenario 4 "The Pragmatic Defense of St. Stephen" tomorrow, now that the Scenario 3 report is up on Battle Game of the Month.
Posted by Rob Dean at 8:58 PM