Perhaps it wasn’t an “official” convention with a proper name, a program, and all of that, but I had the opportunity to get together with my sons for a two-day game gathering this weekend.  All three of us are employed by organizations that observe all federal holidays, so this was a three day weekend for all of us. That allowed us to seize the day(s).  We had been awaiting an opportunity to do so since younger son William arrived back in this general area in October.  Elder son Norman’s house was the obvious location, as he has been able to take over a finished basement room as his gaming and hobby space, with an adequate 5x6 foot table. 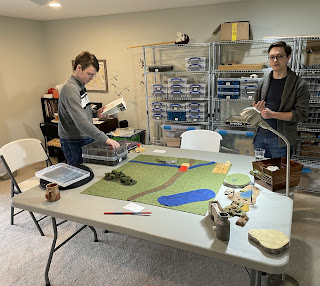 Norman’s space, with the inevitable Really Useful Boxes neatly organized on shlves
As it worked out, we didn’t need the whole table, since the main program was a series of DBA games using various historical armies from our joint 1/72 scale plastic collection.  Norman had noted that we have at least 20 armies available to us at the moment, so he has decided to pit them against each other in an effort to determine which is the most powerful/successful.  He has divided them into four divisions of five armies each.  Each division will see each army play the others in a round robin format, with the two most successful armies in each division advancing to an elimination bracket tournament.  Some quick math will show that the divisional tournaments will consist of ten games each, and the final elimination will have three rounds of four, two, and one game respectively, for a grand total of 47 games.  This will not be a one-weekend effort.  Perhaps he will write something up about this eventually on his blog…
Between Saturday and Sunday, we completed the ten games of the first division.  Since William doesn’t own any of these armies, and Norman owns most of them, we tend to play somewhat objectively, and do not generally treat this as though it were a map campaign, with a strong personal identification with the fortunes of a particular army. 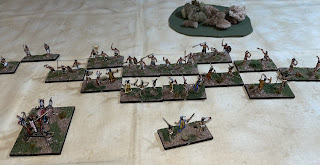 Bronze Age Libyans face off against early Arameans
Once we had enough of DBA and needed a break, Norman set up a 19th century imagi-nations scenario.  We used (again) the rules in Neil Thomas’s book Wargaming Nineteenth Century Europe.  As with our Thanksgiving weekend, Norman chose one of the included historical scenarios, the battle of Oeversee from the Austrian/Danish War of 1864: 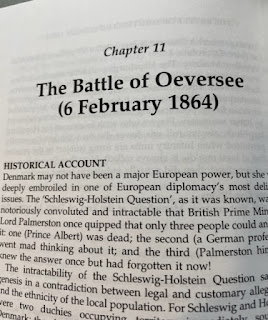 Neil Thomas is a proponent of fast, compact games.  This scenario is intended for a 2’ x 2’ space: 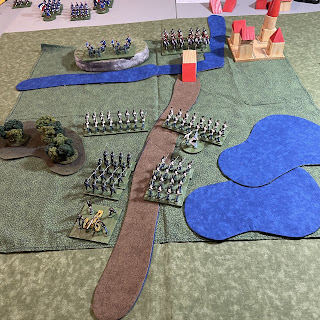 We had set it up on the 3’ by 3’ ground cloth we had been using for the DBA games before we looked closely at the scenario and concluded that the table was even smaller.  That’s how we ended up pulling a second ground cloth out of our ready supply of ground cloths and resetting. The town and bridge were provided by the usual toy soldier-appropriate Castle Blocks and the trees are from Norman’s old collection of 6mm scenery.  Wooden trees seen in some earlier battle reports are part of my collection of childhood toys, and weren’t part of what I was requested to bring.
As can be seen from the set-up above, there was little room to maneuver.  The “Danish” forces, at the bottom of the picture and represented by Norman’s white-coated Elabruners were a rearguard.  Their orders were to hold the “Austrians” (represented by Norman’s Occiterrans) for ten turns to allow the remainder of their army, off-board, to retreat.  The Occiterrans were restricted by a doctrinal preference for the bayonet over firepower, but also started with their artillery deployed on a hill safely beyond a stream, and with the range to bombard the Elabrun infantry from the beginning.  William commanded the Occiterrans, and pushed aggressively forward, clearing the road in just six turns, so the game did not take long. 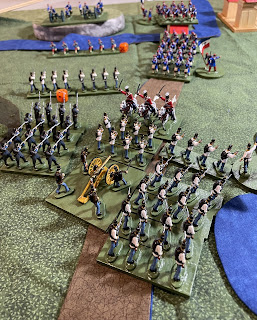 We had some supper, and spent the evening with some board games.  We played several rounds of
Kingdomino, which I received as a gift from my parents at Christmas.  It’s a fast and engaging Eurogame, and I’m not surprised to find that it received the Game of the Year (Spiel des Jahres) award in 2017.  We also played a round of Azul.  We’ve been playing quite a bit of Azul on Board Games Arena, one of our favorite online hangouts since the plague, but this was the first time I actually played with a physical copy.
I will have a separate post soon about my recent revisitation of some 6mm projects.  I took my 6mm Hordes of the Things/DBA collection, handily contained in a large tackle box, with me this weekend.  On Sunday morning, Norman and I continued with the DBA 3.0 theme, but switched over to 6mm and pitted some early Franks against 3rd century Romans. 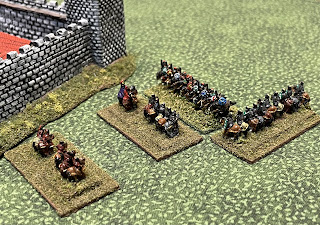 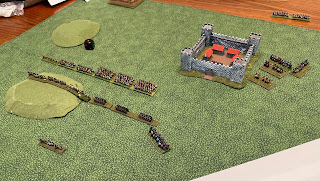 Both games were routs, one for the Romans, and then one for the Franks.  I have had the Roman fortress for many years (a TCS Model, now sadly no longer in business, but once a mainstay of the Historicon/Cold Wars dealers’ room), but I believe this may be the first time it has actually featured on the table as an active fort.  In any case, I enjoyed seeing the “little guys” out on the table.  They were most recently on the table as fantasy forces in an experimental playtest game we had at Huzzah in 2015, and, according to my records, were most recently deployed as actual ancients in May 2012, also at a Huzzah.  As I recall, that was also a test, of the Basic Impetus rules.  These figures used to be my usual portable set, and were therefore along at conventions as a contingency game. 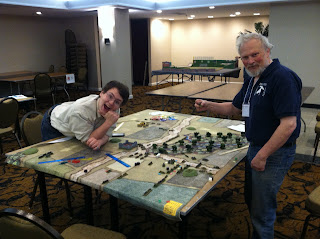 Huzzah 2015 6mm fantasy playtest
I asked Norman this weekend whether he recalled how it was that we got away from this well-used project, a staple of my kids’ childhoods.  He noted that, to the best of his recollection, we started down the path of recreating a Hordes of the Things set up in 1/72 scale after he realized, while fiddling with the wargaming impedimenta around the house, that an Italeri Saracen was just the right size and shape to ride a plastic dinosaur from a Jurassic Park board game.  On such chances do the fortunes of our lives depend …
We closed out the weekend with a game of the popular board game Terraforming Mars, which took a little longer than we had estimated.  I look forward to a rematch, now that I have some slight idea of what I am trying to do.
It was a good start to the gaming year, and I hope that we will be able to gather again soon, even if not for a two day extravaganza.
Posted by Rob Dean at 8:00 AM