Catching Up a Bit — Scenery and Remote Games

I haven’t done well at updating my blog the past couple of weeks, but all is still well here under lockdown.  I am still finding myself too distracted to paint as I would like to, but I have gotten the big brushes and craft paint out and had a go at some scenery.  First up is another of the resin village buildings I’ve been working on, the “Trader’s Shack“ from Apocalypse Miniatures. 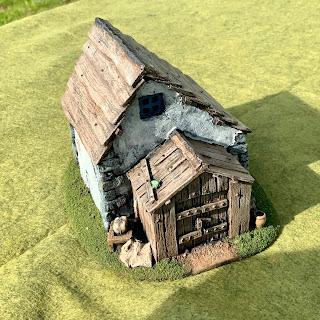 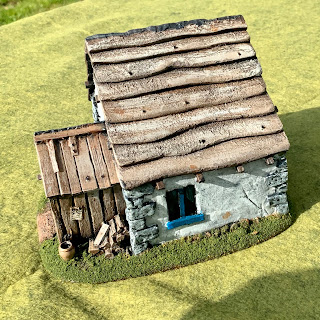 I am looking forward to getting the village into a game; at three buildings plus the outhouse, it’s starting to look like something.  A fourth large building, the Apocalypse “farm house” is on the painting desk with some paint on it.

Last weekend I pulled out all of the 25mm scenery boxes, sorted, consolidated, and labeled, so I now have an empty 12 liter Really Useful Box earmarked (and labeled) for transporting scenery for away games, and all of the scenery pieces have a labeled box to call home, so that can be sorted back after use.
In the upper right corner of the organization picture, a tan ruined tower can be seen.  I think I acquired this from a dealer at Huzzah a couple of years ago.  The manufacturer had already gone out of business, so I couldn’t get one in the grays I usually use for scenery.  Since I found it while organizing, I was reminded that I should try repainting it.


Happily, the recycled tire material seemed to take paint well, and I am pretty happy with the enhanced piece.  Now that it looks like it fits in with the rest of the scenery, I hope to have it on the table soon.

Following the scenery sorting, I set up a game of Burrows and Badgers. 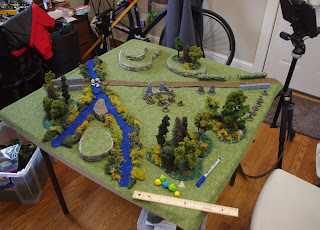 My brother joined me remotely, seen in the upper right where a clamp to mount my iPad to a photographic tripod had arrived to make remote gaming easier.

We ran B&B last year at Gencon, so I used two of the war bands I had statted out, printed, and laminated.  I took the unlucky Reynard the highwayfox with his new-fangled pistol, and Norman took Sir Caradoc, a noble dog of the old school.

A roll for scenarios brought us an ambush of a camp, and Reynard was elected to be the ambushee.  While he actually had some success with the pistol, for a change, Caradoc personally managed to bring him to justice.  I was reminded that I have an unfilled appetite for some detailed skirmish gaming; I should do something about that.

Just before everything locked down, I ordered a Hot Wire Foam Factory kit and picked up some 2’x2’ sections of pink insulation board from the Home Despot to work on my scenery upgrade.  The first warm day we had, I took the foam cutter outside and sliced up a few test hills.

I recently acquired a neoprene mat from Frontline Games to be the usual basis for miniatures in the gaming table.  I hoped that Woodland Scenics flock would be a reasonable enough match; otherwise it’ll be post-lockdown before I can use the sand and house paint technique.  When I flocked the first test hill, I found that I had misplaced the reserve stock of flock, so I needed to reserve what I had for miniatures.  It was close, but I thought that it might be improved with some mottling of other flock shades.
Eventually the flock supply arrived. (Thank you, USPS, for continuing to work during this!)  I tried again, and thought that would probably do.

With the remote game this weekend, I was able to open up the table, which has generally been in use as my partner’s work-at-home space, and set up a game, including the test hills.

You can judge the overall results from the set-up picture.

This week’s remote game was played by Chris Palmer, who volunteered to help me out by taking one side in a pending battle in my Northlands (usually solo) campaign.  I shall hope to get a separate battle report up for that, but the short version is that the defenders of the kingdom of Darmis defeated a detachment of raiders from the neighboring kingdom of Verdance.  The small encounter was played out using the Dragon Rampant rules, and the “Crystal Gale” scenario from the rule book.  With that out of the way, I can figure out what the other pending battle looks like, and then get on with the next month’s worth of map movement.

At least with a solo campaign, nobody else is inconvenienced if it takes a while to resolve the next event.