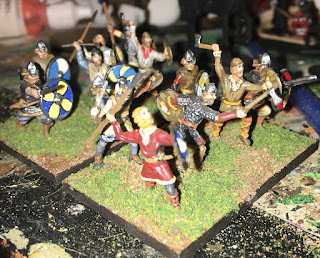 I am continuing to gradully chip away at the Hordes of the Things barbarian (Viking) army which I want for my projected solo fatnasy campaign. I finally finished up two more warband stands (though I should take their picture from a greater distance...), which puts me close to being able to deploy a 24 point standard Hordes army. When using these figures wih Dragon Rampant, as also planned, two stands are a unit, so I'm still short about 4 stands of a reasonable warband.

I also inventoried the 1/72 fatnasy recently, and came to the conclusion that I could (barely) deploy two armies for the feudal kingdoms on the fantasy map, so I am hoping to put some preliminary games on the table soon.
Posted by Rob Dean at 9:21 AM