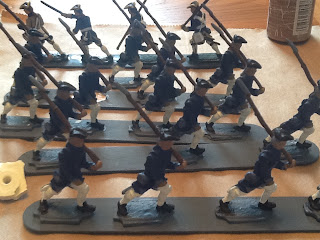 This ends up being a little hard to see, but I had some quiet time this morning and was able to put in some work on a company of Schoeffen-Buschhagen infantry for the Not Quite Seven Years War. They are still two or three sessions from being finished, but I was glad to be doing something positive for the first time in a while.

I also had the opportunity yesterday to finally finish a batch of magnetic movement stands intended for Charge! I hope to deploy some sample units and take some pictures later today.

(Picture taken with my iPad; not the world's best camera, either for resolution or for ease of handling.)
Posted by Rob Dean at 10:10 AM