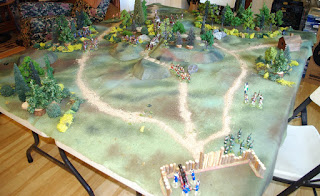 We played that old stand-by, The Wagon Train from C.S. Grant's Scenarios for Wargames (aka The Green Book). In this action, the French raiders were successful in their attempt to destroy the convoy, though it was tense.
Posted by Rob Dean at 9:55 AM