I mentioned in a recent post that I was having trouble with my blogging software, and found that an update was available. I  hoped that would address the issue, but it has not, and I had to improvise a bit to get this posted.

To roll back time a bit, I had the opportunity to go to Gencon again this year. Family planning for this started back in the winter, and we registered for events in May, so the trip was a while in the making. Four Deans made it to the convention this year, and we elected to just stay with my brother, who lives in Bloomington, so each day was bounded by a commute. To keep all of this straight, son Norman put together a schedule spreadsheet to share with the rest of us, using Google Docs.  It was a work of art by the time we were ready for the convention. 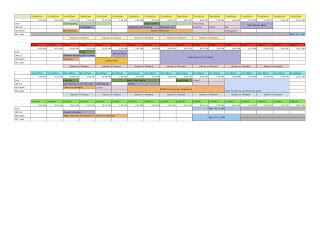 My brother Norman started off with the unofficial Wednesday, running his first convention game ever, a fantasy miniatures game using the Ral Partha Chaos Wars rules. As I would expect, based on long experience in running games at conventions, only half of the preregistered players showed, and he was able to replace them with enough walk-ins to play the game. He had a good time, and is ready to try again next year. While he was doing that, my son Norman and I were flying west from Baltimore, and he met us at the airport.

As with last year, Indianapolis greeted us with figurative open arms. 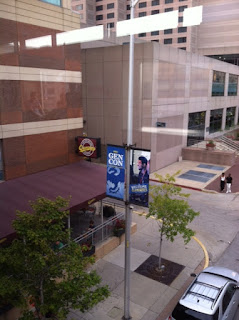 The convention officially started on Thursday. We got there bright and early, so as to have a chance at a good parking space. Therefore I had time for a quiet cup of coffee with my brother before kicking off the convention with a Games on Demand session. GoD is a network of gamemasters running a variety of small press roleplaying games throughout the convention in two- and four-hour blocks. Players essentially draw randomly for a position in line, and choose a game to join when it's their turn. This works best if one has an open mind about what one is about to play. I thought it would work well to do a two-hour session while the crowd for the exhibition hall cleared, and ended up in an anime-style mystery game. We solved the puzzle without getting into any fights, to the surprise of the GM, but which was fine with me. It got me off to a good start for the rest of the convention.

The initial crush in the dealers' hall was over by the time I got there, so I spent some time wandering around, checking out some vendors on my Kickstarter list and just taking it all in. 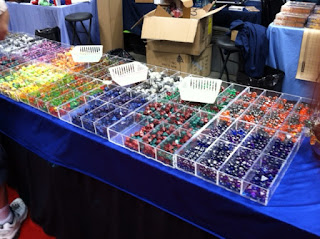 My SO still finds the dice hard to believe. There were a number of vendors with their color-coded dice displays sprawled over multiple tables. 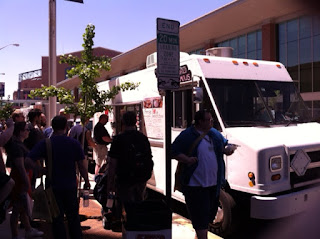 Gencon is well set-up for food. In addition to the walkable downtown and the on site food options, we availed ourselves of the variety of food trucks that appear for this event. We had pierogis one day, Indian vegetarian another, and turkey Reubens another, and had to pass up quite a few interesting looking ones, or ones for which the lines were too long.

I had signed up for a seminar on Impro for Roleplayers on Thursday afternoon, which turned out to be a lot of fun. It was run by a WotC guy, Ryan Millner (sp?), and was very well attended. I was happy to find that it was a participation event; it had been possible that it might have just been a lecture, but we were all up playing theater improv games ten minutes into things. 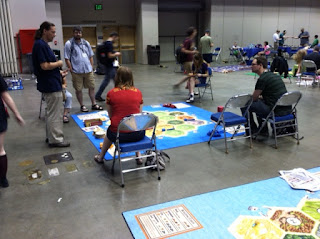 The gaming spaces were enormous; of course, to play giant Catan might need some room.

My brother, being local, led us out to dinner at a nice place (which I won't name to keep the crowds down...) just beyond the typical walking distance from the convention center. While there, we received the bad news that our fourth team member, my son William, was going to be delayed by at least four hours in his flight in Thursday night. We had to hastily rework our plans for the evening so that we could pick him up and still get enough sleep to be safe. He ended up having to nap at the airport while waiting for a dawn pick-up, which was less than optimal, to say the least. As part of the rework, my brother and I had to drop a fantasy miniatures game we were both preregistered for, so I understand entirely how it is that people end up not showing up for games...

We picked up a tired William from the airport around 0700 and went for some breakfast. After that, my first event for the day was a little change of pace. In addition to gaming, my other hobby is ballroom dancing. An outfit called Dancing and Dragons has been doing a ballroom track of events, so I dropped in for a tango session, just to see how this shaped up. I really wanted to know how they were going to teach a beginner Viennese Waltz in an hour, but that didn't work in my schedule. The dancing was well attended, with near gender parity. I went from there to a live recording of the Ken and Robin Talk About Stuff podcast. Unfortunately for posterity, they ended up having recording difficulties, so it was live, but not recorded.

All four Deans were signed up on Friday afternoon for a Chainmail game with a Tolkien-based scenario, The Cleansing of Tyrn Gorthad. Yes, this is the Chainmail that had the fantasy supplement that formed the basis for the original Dungeons & Dragons, not the later WotC game of the same name. The four of us ended up as the forces of the Witch King of Angmar, running down a Dunadan/Elvish allied force on the Barrow Downs. 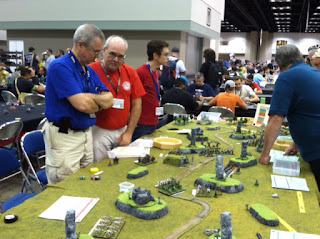 From left to right in this shot we have me, my brother, and William, who was pretty well exhausted. 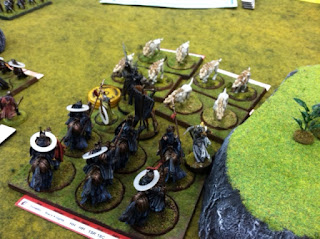 In a final climactic encounter, the Witch King rode down Glorfindel, so we scored a decisive victory for the forces of darkness.

My brother was very pleased; making sure that we all got into this game had been a major effort back in May, and he thought it time well spent when we were finished.

After the Chainmail game we headed back to my brother's house so that William could finally get some sleep.

Everybody was a little groggy on Saturday, and we had a little mishap involving a forgotten badge that caused us all to arrive later than planned. My brother and I ended up reworking our schedule slightly, and played a Chaos Wars demo with the team from Iron Wind Metals. I had to watch the time, because I was signed up for a 5pm speed painting competition. Speed painting is sponsored by several different companies at Gencon, and the only one that worked for my schedule was sponsored by Wyrd Games, the makers of Malifaux, a steampunk skirmish game I don't actually play. Each participant gets the same miniature, assembled and primed, three brushes (one to keep and two battered communal brushes), access to about twelve colors of paint, and 45 minutes. 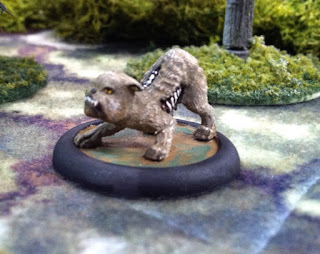 In my round, we ended up painting this undead dog. Much to my surprise, I was rated first in the round, out of sixteen painters. In retrospect, except for the bad communal brushes, it's a lot like how I paint at lunch at work sometimes, so it's possible that I might count as well practiced for the conditions. The win got me a $10 gift certificate from Wyrd, and a place in the final round on Sunday. Add that to a free sable 0 brush and the miniature (which we got to keep), and that was a pretty good haul for a $2 entry fee.

As can be seen from the picture below, everyone was dragging a bit by Saturday night. However, it was time for the Dean family pick up game. We were joined by a couple of Iron Wind Metals staffers for another game of Chaos Wars. Now that we have done pick up fantasy twice, it is a tradition. I think that I explained in last year's AAR that it goes back to the other Gencon that my brother and I attended, back in 1980. One day at that convention we passed a fantasy miniatures game taking place on a table in a hallway, and the players looked like they were having more fun than anyone else we saw that day. So, when we went last year (after a mere 34 year gap in attendance), Norman told me that he wanted to make sure we had a fantasy miniatures game in reserve. This year, since he's been spending time working on his own games, we were able to pull this together as a collaborative event. He provided the scenery seen below, and I brought two 6-liter Really Useful Boxes (see on the table to the right of the game) with a selection of classic Ral Partha fantasy miniatures to fit the Chaos Wars theme. Since we had extra players, we also rolled in a couple of units from the Iron Wind demo kit, in true Stone Soup fashion. Our mat, by the way, is a Cigar Box Battles product. They turn out to be extremely handy for this sort of rapid set-up pick up environment. 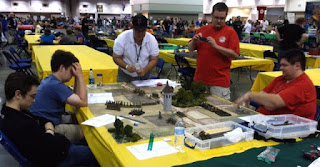 Norman (son) joined me on Sunday morning for a return visit to Games on Demand. We both ended up in a session of the indie game "The Quiet Year", a collaborative map drawing game of post-apocalyptic community building. Since Norman is a serious cartography enthusiast, this turned out to be right up his line, and he scurried down to the dealers' hall after the game to buy his own copy.

My last event was the final round of the speed painting competition, with the only change in conditions from the previous round being a 60 minute painting time, rather than a 45 minute time. 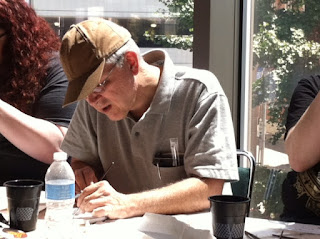 Unfortunately for me (though unsurprisingly), the miniature this second round turned out to be more challenging than the undead dog. We got this fire-ball throwing lady with a mechanical wing set, and I was having trouble with the face due to the lack of my customary magnification and the smallest brush being a 0. I also should have stayed as monochromatic as possible, doing the cloak and the rest of the clothing in the same color. That would have left me with more time to fuss with the face. Anyway, they only officially score the top three, but it looked like I ended up in the middle of the pack of 16. Still, 6th or 7th out of the original 80 in the five qualifying rounds isn't too shabby... 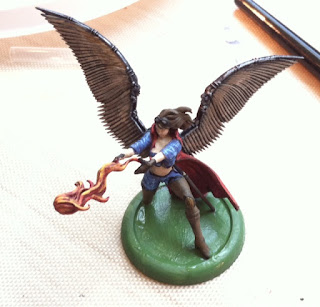 I still haven't finished this figure up to my satisfaction, but I will sometime soon. I'm not sure how she'll appear in a game. Speed painting will definitely be on my schedule next year, if I can make it work at all.

After the speed painting finals, it was farewell to Gencon and back to the airport. Happily, the trip home was uneventful, leaving us to start thinking about what we would do next year, if we get the chance.