As I've mentioned recently, Norman and I have had the opportunity to put our 1/72 scale Hordes of the Things armies on the tale three times in the past two months.  After the first game, I started painting some 1/72 scale fantasy figures, which I hadn't done in a while.  This has also left me thinking about a campaign...

As is often the case with miniatures, several different influences were a factor in this latest visit from the muse.

One of the advantages of raising two sons in the hobby is that, until recently, I always had opponents available.  My sons, as it turns out, were raised with Hordes of the Things (and Charge!, but that's a different story).  In their earlier years, the figures we most often used were my 6mm collection, eminently portable, but perhaps not the most visually appealing figures possible.

We also did various games with 1/72 scale plastic figures, which were easy on the boys' allowances.

About the time Norman graduated from college, these two influences converged, and he started assembling some Hordes armies with the various leftover plastics.  Both he and William could paint the 1/72s to a high standard, higher than I could...at least until the Optivisor evened the playing field a little.  I took an old project I had and repurposed it, and then added a few stands of figures from the then-recently-released Caesar Miniatures 1/72 scale fantasy range.

With one thing and another, that project stalled, and I didn't get back to things until 2014.  With our first visit to Gencon coming up, I decided to assemble a Portable Fantasy Game, and used the Caesar figure already on hand as the basis of a 1/72 scale skirmish game using Song of Blades and Heroes rules, which packs into a 12-liter Really Useful Box.  A check of airline web sites suggested that the 12-liter was the largest which could reliable be placed under the seat for a flight.


This included a ground cloth, several foam filled hills, sewn for me by one of my son William's college classmates ...

some trees, plastic rock formations, Dave Graffam card model buildings, old Gallia resin walls, and two boxes of singly-based 1/72 scale figures.  When it was all set up, the whole thing looked something like this:

Or like this, from our family pick-up game at Gencon in 2014:

Because the ground cloth is 3 feet by 3 feet, it's also what we usually use for our Hordes of the Things games.  Last year, before William left for graduate school, Norman had organized a simple campaign, based on an idea from the Frank's Toy Soldiers blog.  It took several sessions for us to arrange to play the battles from a basic single-elimination bracket, but, with the possibility of gaining subject forces by a solid victory built into the campaign rules, it was a tense and interesting series of battles.  So, having the forces out on the cloth reminded me of the campaign, and left me wondering whether it was time to do something again.


My basic idea is this:  the Portable Fantasy Game box has the scenery necessary for a variety of battles, and a bunch of individuals.  A 6-liter box (of which I have three used for auxiliary transport to conventions), should hold at least 30 of the 60x40 bases we use for most of the 1/72 scale figures, and the typical Hordes army is about 10 bases.  So, three armies should fit per box, or, allowing for some flexibility in units, five armies in two boxes. That would make for a reasonable campaign set-up, and I also realized that most Hordes armies would flex to become a  Dragon Rampant warband, so I would have figures on hand for three different levels of combat.

Next session: thinking about maps, rules, and how the levels of action might fit together.

Saturday was a good day for gaming.  We had another round of the HAWKs club Frostgrave campaign, using scenarios from the Thaw of the Lich Lord book (or whatever it's called).  This time around, the Lich Lord's cultists were bogged down with a treasure caravan, which proved an irresistible lure to the dedicated treasure seekers who prowl the dead city of Frostgrave.  My crew, led by Basil the elementalist and his apprentice Rosemary, found themselves poised to swoop down on the center of the caravan, where much of the richest treasure lay.

Despite the efforts of the cultists to protect their ill-gotten loot, Basil and his henchmen looted two carts and found a few loose treasures beside, so I ended the day with five, when a "fair share" would be three.  I haven't kept meticulous records, but I think this may be the most successful raid I've had in the year-plus that we've been campaigning.


To add to the game, one of the seven players was my son Norman, who has recently finished painting a war band for Frostgrave out of spare Reaper Bones we've had around the house.  He came up from DC for the day, but it was a rough day for his band.  His apprentice was killed and the pickings were somewhat slim, as he found himself embroiled in an extended scuffle with another treasure hunter.

Later in the afternoon, he and I continued the series of Hordes of the Things games we have been running recently.  I mocked up a sample army of the Cold Islanders (Viking-inspired barbarians) that I finished a unit for this week, and Norman took an army led by an ancient magician featuring giant scorpion demons (behemoths in HotT terms).

Unfortunately for me, I had not considered that war bands such as my barbarians are particularly vulnerable to behemoths, and his army swept the field in short order, with the only worrying moment from his point of view being a single unsuccessful raid on his stronghold by one of my two heroes.
At least the archers came out looking satisfactory...I dug around in the "pending paint" box and decided that I would work on two stands of  two-handed axemen (blades in HotT) as my next effort for this project.

I finished up the rest of these guys today. Unfortunately some of the Revell figures had been rather flash-covered and my cleanup was less than perfect, so they'll be the rear ranks. I will be mounting these as two groups of six, suitable to represent "shooters" for Hordes of the Things.
Posted by Rob Dean at 1:09 PM 1 comment: 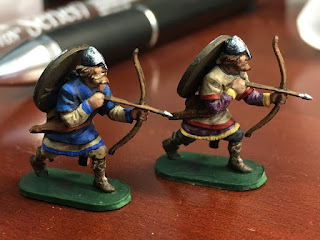 I'm way behind on blogging, but my older son and I have had the opportunity to play some Hordes of the Things with our 1/72 scale plastic armies recently. As a result, I've been inspired to dig out a stalled army expansion project for a fantasy Viking army and start painting. Ultimately, any painting is better than not painting, so I decided not to fight the muse.
Posted by Rob Dean at 4:15 PM 3 comments: